At class last Wednesday I continued experimenting with shibori indigo dyeing. More examples and methodology below. 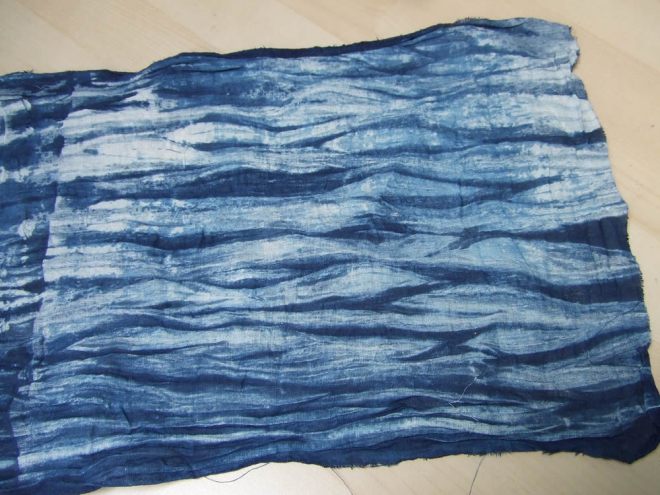 This one was made by rolling the muslin around a thin piece of rope, starting from one corner and rolling diagonally. I then pushed the ends of the roll towards the middle and tied the ends of the rope together. It’s similar to one I did last week, but more dye penetrated this one because the rope was thicker.

Now for some stitched samples. The sunburst above was created by pinching two layers of fabric together and stitching them together with running stitch. On the ring in the middle the stitches were very close to the fold, while on the rays the stitches were further from the fold, creating a larger area of undyed cloth. 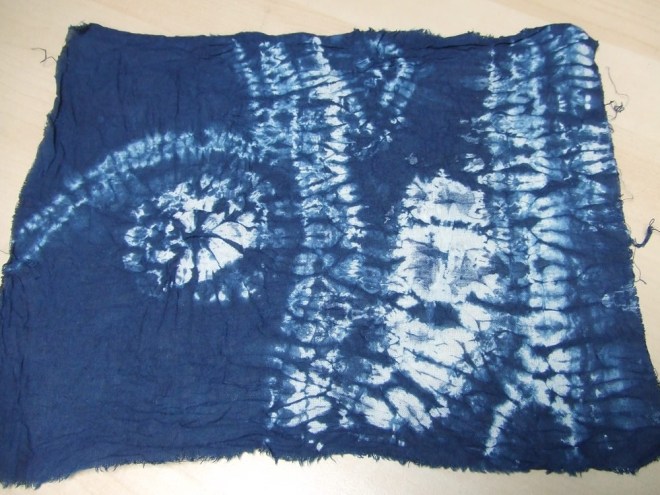 This sample used running stitch in various patterns – horizontally across the cloth on the right, in a spiral on the left.

Tying with thread – here, I wanted to have a series of blue circles in a sea of white. You can see a photo of the effect I was aiming for in this post on the Ardent Thread. However, I couldn’t get the binding close enough together to exclude dye between the rings. Still, it’s quite attractive in its own right.

Here, I folded the cloth in irregular concertina  pleats diagonally, and tied it with paper string. I don’t think the binding was tight enough, as some dye has penetrated the pleats.

Finally, a very simple method – I just scrunched the fabric into a ball and held it in place with a couple of rubber bands. I was hoping for more of a “crackle” effect – this is a bit too hippie for my taste!