A friend of mine used to get deliveries of fruit and veg boxes from Abel & Cole, but then stopped. Some of the items she ordered were kept chilled using insulated packaging made from layers of lightly needle felted wool encased in plastic, made by the Wool Packaging Company. She wasn’t sure what to do with them but felt guilty about throwing them away, so she asked me if I’d like them.

According to the company’s website, after washing and scouring the wool is garneted and then needle felted. When I removed it from the plastic cover, it looked like a fairly delicate prefelt made from various different fibres running in different directions. Some of the fibres were fairly coarse, a bit like Icelandic but not as long, and the colours included the whole range of natural shades, from cream to brown, but mostly shades of grey.

It was also fairly thick, so I tried to separate it into two layers so that I could felt only half the thickness. And because it hadn’t been carded for making textiles, there were still a few burrs and other bits of vegetation present, which I picked out.

After wetting down and adding soap, I rubbed and rolled as normal, and it started to felt quite well. When I rubbed it on the washboard, many of the coarser fibres dropped out – similar to felting with Icelandic and Norwegian wool. In the end it shrank by around 20%.

The final felt is quite coarse and hairy, and even when it’s dry it tends to shed a lot of fibres. However, the colours are lovely and organic. It’s too rough to use as a scarf or anything wearable, but I think that small areas could add some interesting texture with other fibres. Some judicious shaving might be required though!

Here’s a sample of white merino with some patches of prefelt. 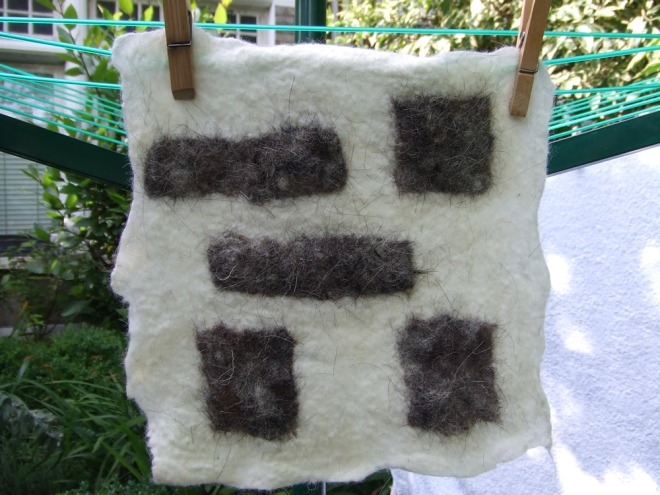 One thought on “Wool packaging”