Long-term readers of this blog may remember that a couple of years ago our house was really badly flooded when the water tank in the loft overflowed while we were on holiday. 😦 We came back to a ghastly mess, but since then the house has been redecorated and we’ve got on with our lives.

Most of the water ended up in the cellar, and although we cleared out the items worst affected, most of the other stuff remained. This included some plastic drawers for storing nails and screws. ESP inherited these from my dad when he died, but as he doesn’t practise much DIY these days they see little use. 😉

As you can see, the rust on these is fairly spectacular (my dad would be turning in his grave if he could read this!). So I thought I’d use the screws to try out some rust dye shibori.

I dipped a silk scarf in vinegar and laboriously tied rusty screws of different sizes into the scarf. I left it on the windowsill outside for 24 hours, by which time it was a good rust colour, with the parts tied around the screws very dark brown.

It was equally laborious to untie the screws. Because I have to bind fabric very tightly when using the indigo vat to prevent the dye from penetrating the fabric, I used a similar technique here, but it was probably unnecessary. However, the results were pretty special.

This is what it looked like immediately after untying. 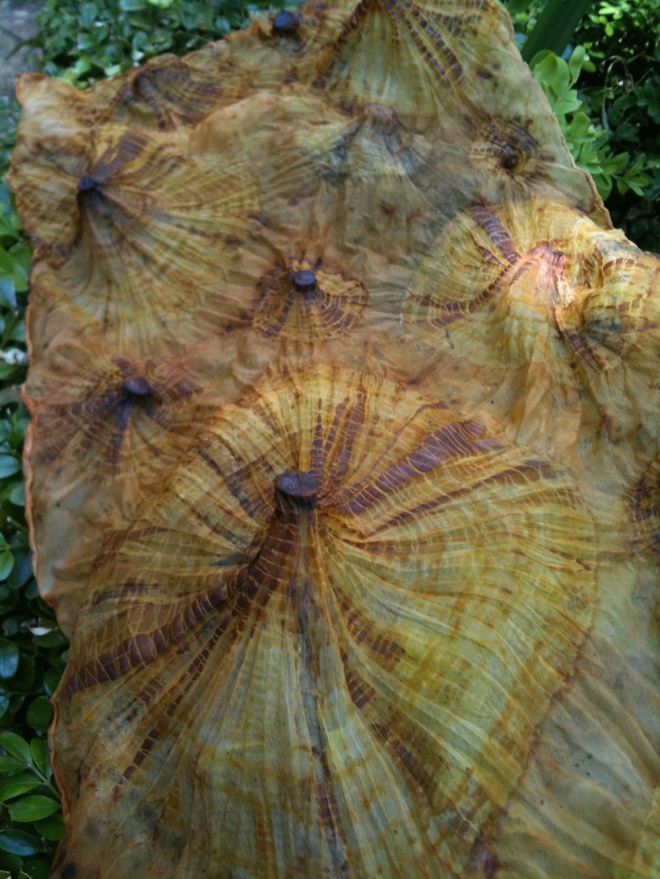 The wonderful peaks created a great shape, but sadly I couldn’t retain these. After leaving it to dry I pressed the scarf to set the colour, then soaked it in bicarbonate of soda, washed it in shampoo and rinsed it. Interestingly, more colour came out this time than with my previous scarf – maybe I should have left it to cure for longer? 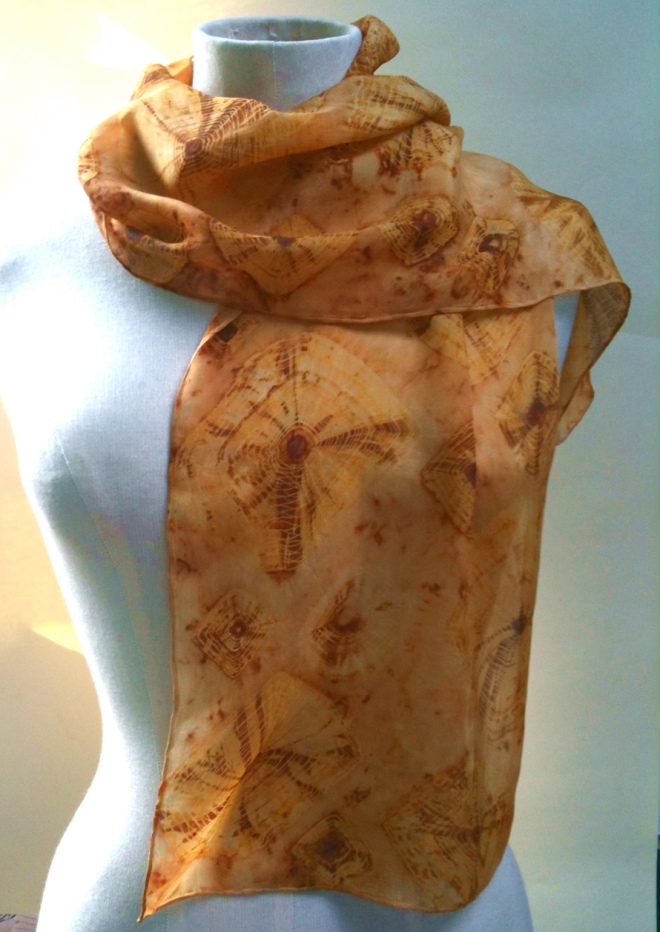 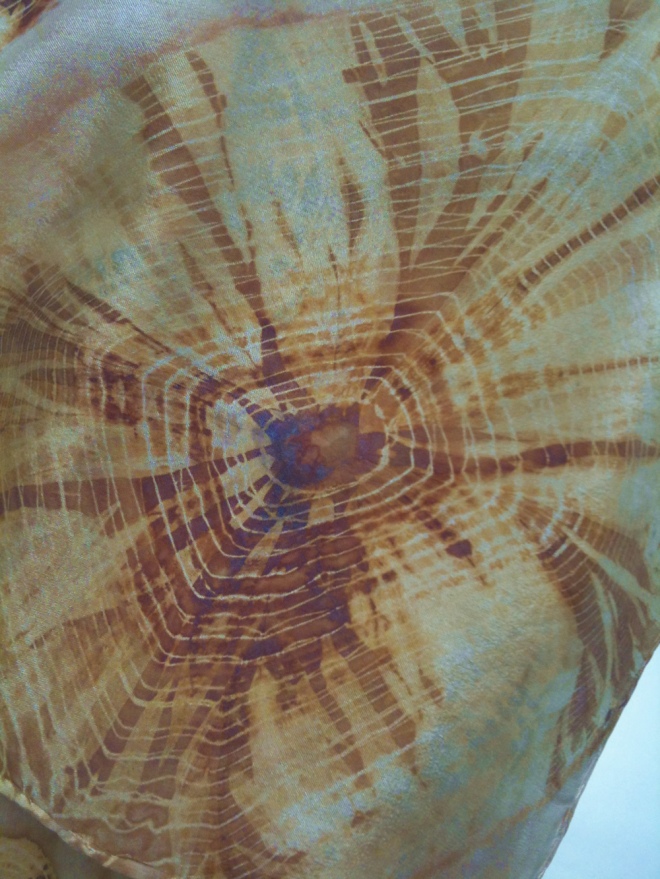 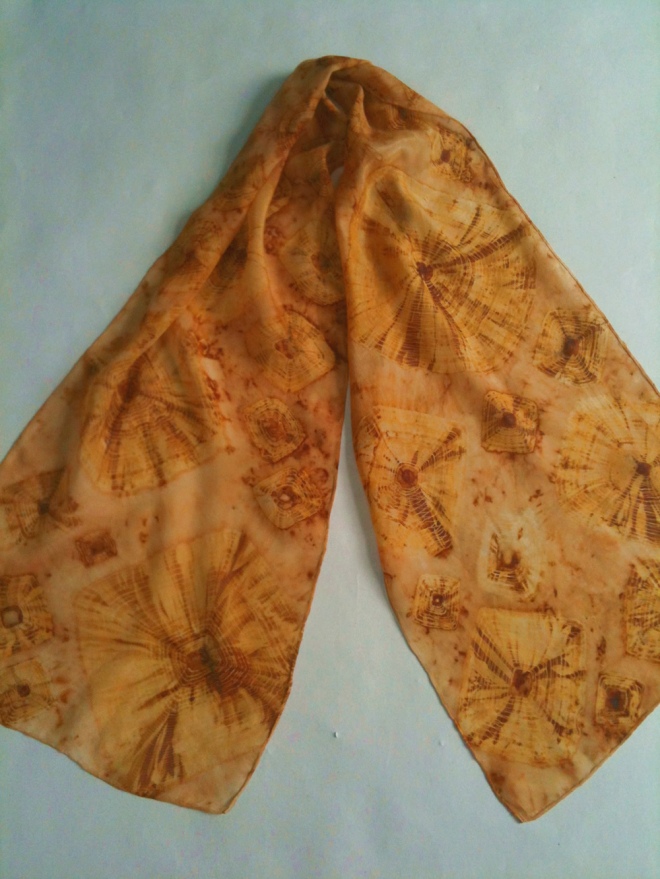 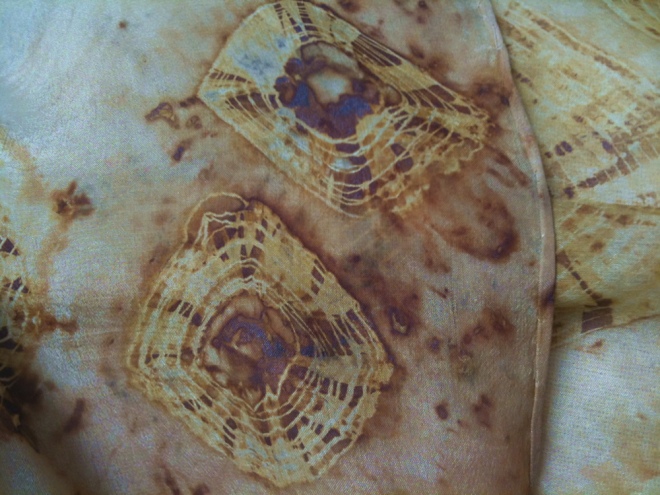 The reason I didn’t want to leave it any longer before neutralising was because there were a few tiny holes in the silk this time (unlike last time). This may have been because some of the rusty screws had quite sharp edges, or because I accidentally made holes when removing the binding. But it could have been due to the rust actually eating through the cloth.

I can’t sell this scarf with holes in it, so I will need to do further experimentation to see if this is a viable commercial technique. Maybe with a less delicate fabric, or leaving it for less time.

But it gives me an excuse to keep it for myself! I wonder what dad would say. 😉