Last night I went to the private view of the London Antique Rug and Textile Art Fair. We usually attend every year, but this is the first time I’ve bought anything!

I was very tempted by a stunning indigo stitched and bound resist piece shown by Joss Graham. Joss said it was made in Indonesia using the tritik technique – aka nui shibori stitch resist. The stitch resist border surrounded an area of white dots on blue created by binding, with a white central elliptical area, presumably created by capping (some of the threads from the stitching were still present).

The piece was about 12 feet long, and it was the practicality of how and where we would display it (along with the price!) that made us reluctantly leave it.

However, I couldn’t resist an Chinese embroidered collar from Molly Hogg Textiles. Made for a child, the collar consists of five lobes of exquisitely precise stitching.

Some of the patterns bring to mind Japanese sashiko stitching; others are more like elaborate geometric samplers. 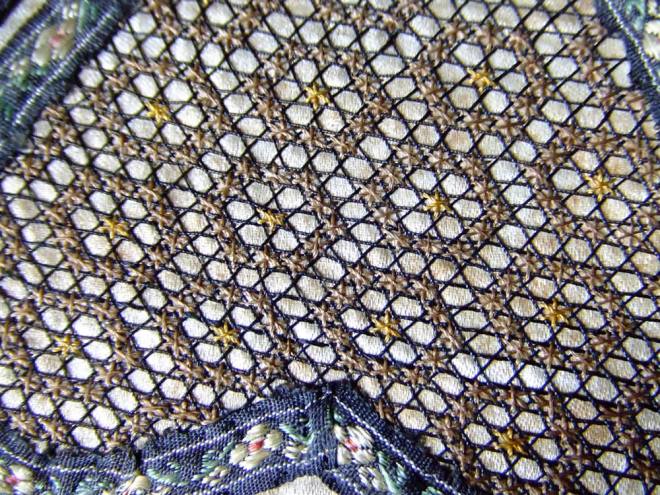 Molly wasn’t able to tell me much about the collar, and I’ve not been able to find any similar examples of collars with this type of embroidery on the internet.

But generally it seems that in China collars were made separately from the garment, allowing them to be worn almost like necklaces with different outfits. If anyone has any idea about how old this is or which part of China it might come from, do get in touch!