The official title of this workshop with Michel Garcia at the 10th International Shibori Symposium in Oaxaca was “Cochineal dyeing in four ways”. It was rather an understatment, as we ended up with 19 different colour swatches from cochineal! 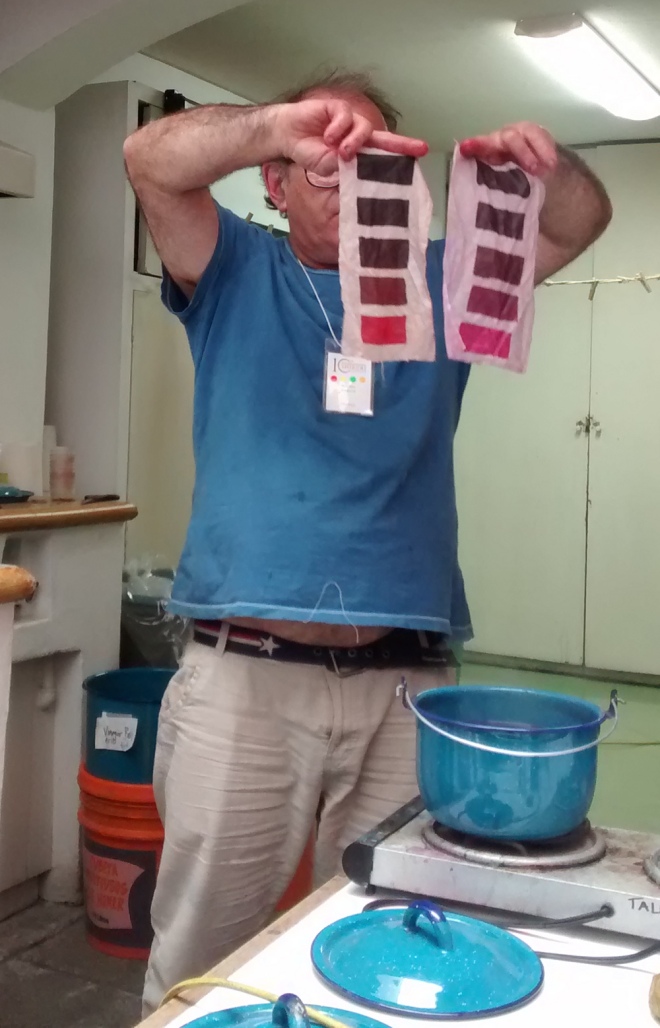 Mexico was an appropriate place to do this workshop, given that cochineal is the most popular dye used there. Mexico once had a monopoly on it – it was the second most valuable export after silver – but after the Mexican War of Independence in the early 19th century cochineal was also produced in Guatemala, north Africa and the Canary Islands.

You can visit cochineal farms around Oaxaca. The cochineal beetle, Dactylopius coccus, lives on Opuntia cactus species. The red colour comes from the carminic acid that makes up around 20% of its body. To make the dye, the dried beetles are ground up in a pestle and mortar and then added to the dye bath.

Michel used three different fabrics – wool, silk and cotton – along with different combinations of mordants and astringents to produce 19 different shades from cochineal, ranging from pink and orange to purple and dark brown. It was an extraordinary demonstration of the variations in colour you can get from one dye.

The fabric Michel used for this was actually a mixture of wool warp and cotton weft, so it was interesting to see the difference between the way the protein and cellulose fibres reacted.

The other three swatches were premordanted (with alum or symplocos) before dyeing in a separate cochineal bath.

Michel also compared the one-bath and two-bath processes on silk.

The other two swatches were premordanted (one in saturated alum and the other with aluminium tartrate) before dyeing with cochineal.

For the cotton demonstration Michel used strips of cotton that he had prepared with different combinations of aluminium acetate and ferrous acetate mordants – it’s a great idea if you do lots of testing with natural dyes.

The strip below was dyed with cochineal and pomegranate rind.

The strip below was dyed with cochineal and gallnut extract.

Finally, Michel demonstrated his artistic side, using different combinations of mordants to paint an image onto cloth that didn’t appear until it was submerged in the dye pot. 🙂 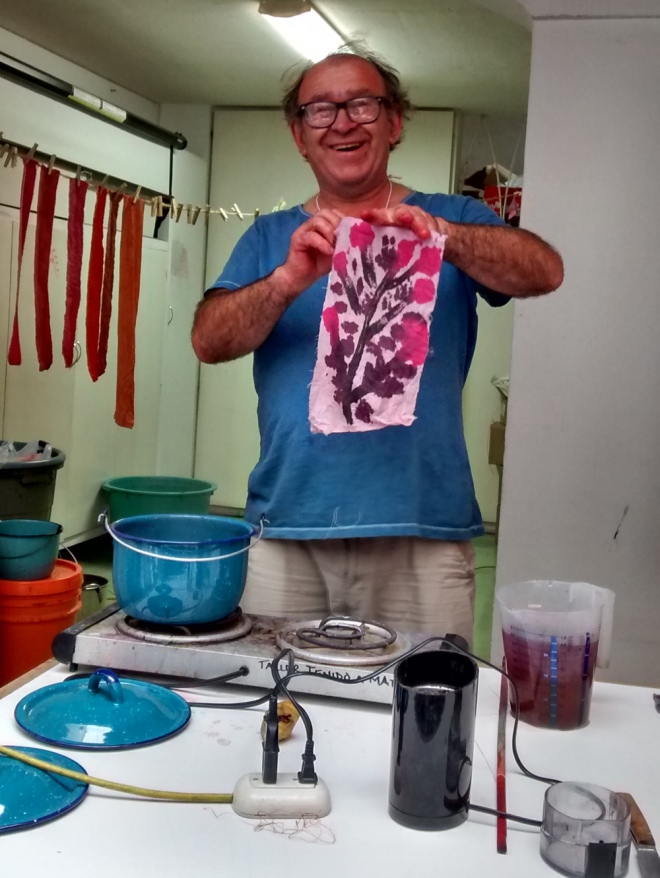 All in all, a very intense but stimulating workshop.