I haven’t been doing much textile work recently, as I’ve been working on a couple of writing/editing projects.

Also, after the loss adjuster had gone through all the tendering process, approved the costs and issued a contract for the work on our house after the flood, it went into administration. So although the redecorating was supposed to start last week, we’re now hoping it will start next week.

But before that a removal company is supposed to come and empty four rooms and put everything into storage, so I probably won’t be able to do much textile work until the job is finished.

On top of that, I’m going to be a volunteer Games Maker for the Paralympics, starting on Wednesday until 11 September! So posting is going to be a bit sporadic for a few weeks until life (and the house) return to normal.

Looking forward, I am going to be taking part in Lambeth Open on 6 and 7 October, at the Portico Gallery. I’m going to focus on indigo pieces for this, so expect some felt vessels and “prints” on paper and fabric. I’ve tried mounting some of the indigo paper and I’m quite pleased with the results. 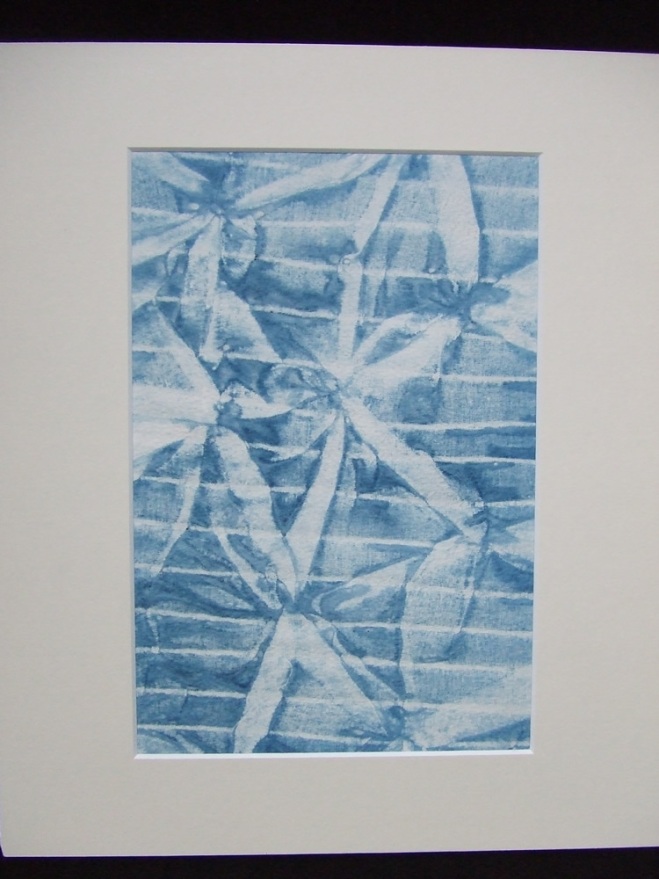 In response to Hilary’s comment below, I should have said that the bottom print was done by binding fabric in loops (as in conventional tie dye) and then wrapping the fabric on a pole on top of a piece of paper. So the fabric itself was used as a resist, if you like – the print was the marks that were left on the paper once the fabric was removed. The fabric is pictured below. 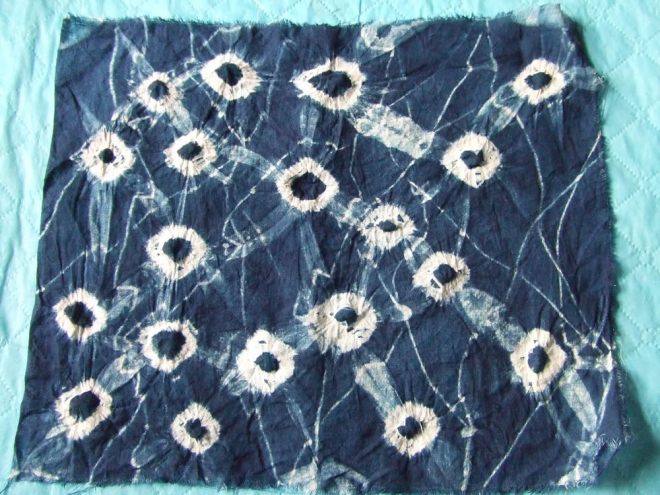 Debby, our textiles tutor at Morley College, asked us all to think about a theme for our work over the next few weeks.

I was finishing my assignment on Sri Lanka last week when I came across a photo of an albino turtle (above) I took at a turtle sanctuary at Kosgoda on the south-west coast. Local fishermen dig up turtle eggs buried in the sand and used to eat them, but now the sanctuary offers 10-15 rupees for every egg brought to it. The sanctuary reburies the eggs, and when they hatch, the  baby turtles are released into the sea.

The sanctuary also has several injured adult turtles, including the albino turtle above. Some of these can be treated and, once healed, released back into the wild. Others, including the albino and one whose front flippers were amputated by a boat propellor, will never be released because their chances of survival in the wild are practically zero. (And they live to 200-300 years old – that’s a lot of fish!)

I hadn’t realised before this that turtle shells could have such distinctive and beautiful patterns rather than the mottled brown and orange you see on “tortoiseshell” combs and boxes. Then I went online and found a few other examples. 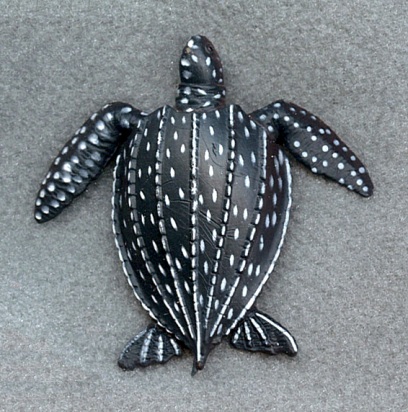 So over the next few weeks I’m going to be exploring the shape, texture, pattern and form of turtle shells in textiles. I’ve got loads of ideas and I’m really excited – so watch this space!