The exciting – and rather scary – news is that I and Tess, a fellow student on the creative and experimental textiles course at Morley College are going to try selling of our stuff at a stall at Spitalfields Market. We’re going for a Friday, as it’s cheaper than a Sunday, so we won’t waste too much money if nobody buys anything.

This has thrown me into a panic about having enough stuff to sell. Tess makes beautiful felt hats and bags and has been planning to do a stall for a while, so she’s built up a bit of stock. We agree that our styles are different, so it doesn’t matter if we both make the same kinds of items, as long as our prices are comparable. But I thought I’d try to make some scarves, to add a bit of variety.

The problem with making felt scarves at home rather than at college is that they require a lot of space, especially as you have to make them longer to allow for shrinkage. Working on my dining room table (the largest area available) means lots of folding over bubble wrap, pulling corners here, rolling edges there – all while trying to avoid pools of soapy water dripping onto the floor.

The other issue is seasonality – with the weather getting warmer, people won’t want to buy thick heavy scarves. So I made a couple of lighter ones in network felt (below), the blue one with silk threads running across some of the holes. I’m not sure it was that successful – it probably needs more silk to avoid simply looking messy.

I also really liked the pleated nuno net scarf I made using the ‘cooked shibori’ technique of tying it up and steaming it. So I made a couple of larger shawls at home and tied them up and steamed them in the tea urn at college. 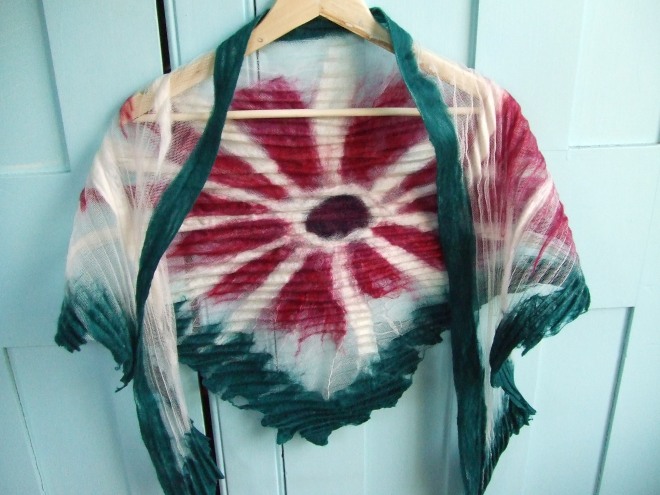 The next challenge is whether I can do this ‘cooked shibori’ technique at home, as term has now finished. I don’t have access to a tea urn, so will have to improvise somehow.

Alternatively, we can just sell bags and hats.

Thanks to the kind advice from the wonderful Nicola of Clasheen, I have managed to make a bag with a felted in shoulder strap. It’s not perfect – the strap joins the bag slightly lower on one side than on the other – but I have proved I can do it! Many thanks to Nicola for her help.

As you can see from the photo, I’ve also been experimenting with felting in some wool slubs I ordered from World of Wool. The slubs vary in size, but the longer/larger ones seem to felt more easily – the smaller round ones I added to the bag above just refused to stick, no matter how much I rubbed.

I’ve also made a couple of bags without shoulder straps.  On the purple/red one below, I had more luck with the slubs, using them in combination with silk waste fibres.

I also cut up one of the bargain silk scarves I found at Spitalfields market and used scraps to decorate another bag (below). I put some wisps of merino across just in case they didn’t stick, but they felted in really well, except for the bits of hem at the ends, so I just trimmed those off afterwards.

The fabric strips were in straight lines when I laid them on the wool, but I noticed as I was rubbing in a circular motion that they started moving to the left or right (depending on whether I was rubbing clockwise or anti-clockwise). I quite liked the effect, so I left it – it looks like seaweed swaying underwater.