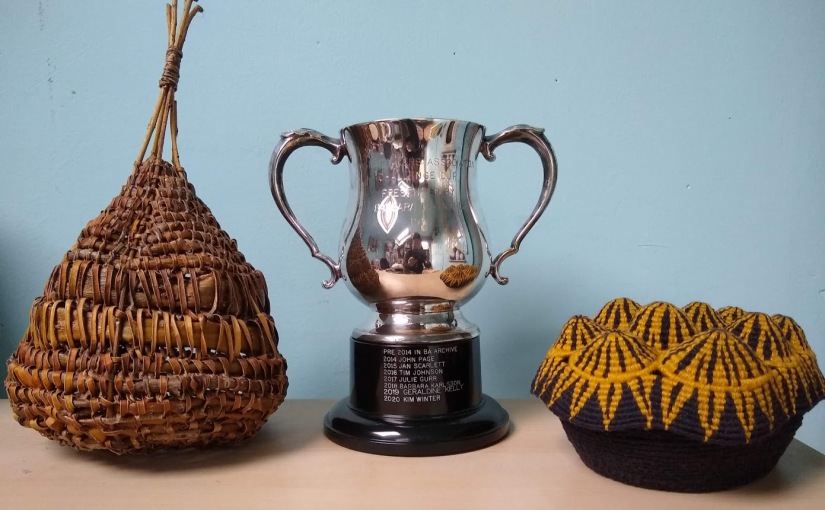 I’m thrilled to announce that I have been awarded the Barbara Maynard Challenge Cup for 2020 by the Basketmakers’ Association.

Every year at its AGM the Basketmakers’ Association holds a competition for members and presents the winner with the Barbara Maynard Challenge Cup. However, because of the Covid-19 pandemic, the AGM was held online this year. So instead the committee decided to award it to a member whose work has really stood out on social media in the past six months. And that turned out to be me!

I feel really honoured to see my name alongside some great basketmakers, including Tim Johnson and one of my tutors at City Lit, John Page.

If you’d like to see the images that led to the award, head over to my Instagram feed. At least now I have a justification when ESP complains about me spending too much time on social media! 😉

My fascination with Möbius strips continues. Although the first triple-twist loop I made was rather small, I have a friend with very slim wrists, so it proved to be the perfect birthday gift!

I then went on to make a slightly larger version, this time wrapping with paper yarn, which produced a much stiffer piece than wrapping with wool. 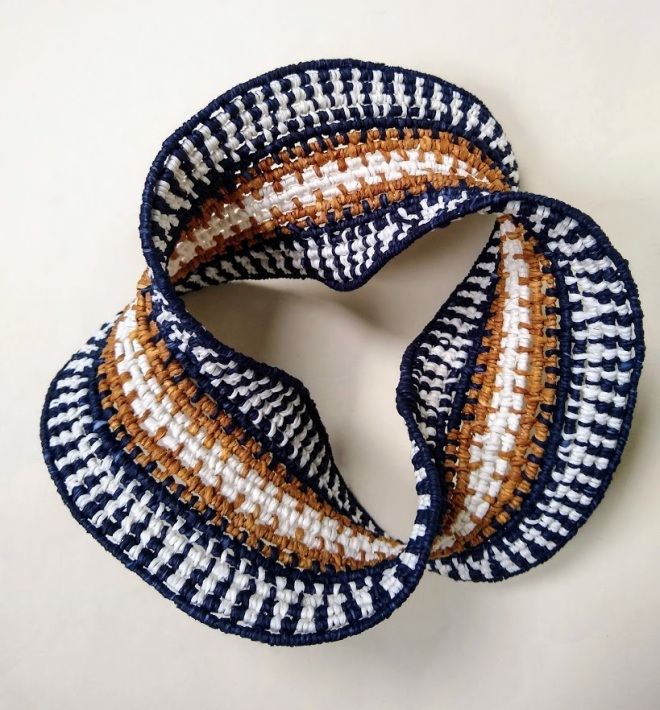 Some of the yarn I dyed with indigo and onion skins. 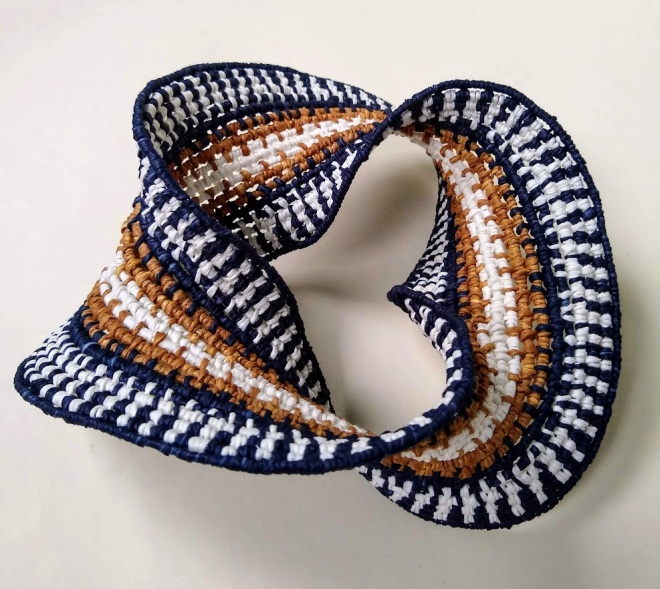 What next? Obviously it was time to try interlocking Möbius strips (but with only one twist in each!). 😉

I did a paper mock up of how this might look. 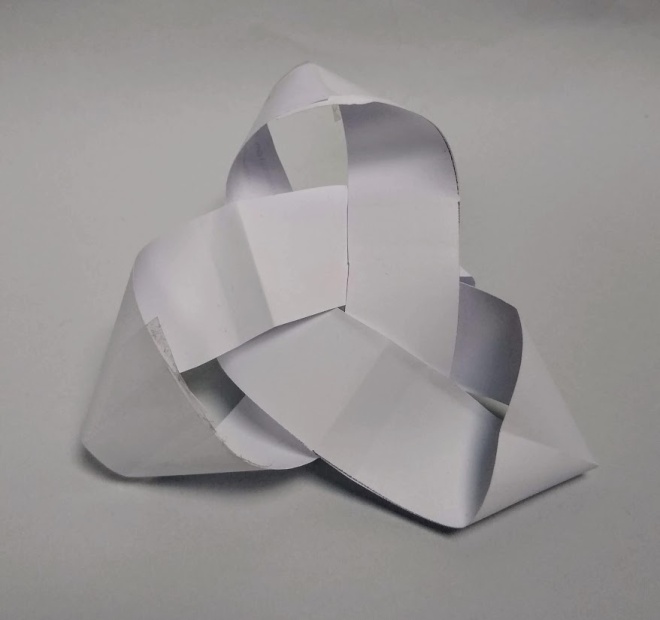 Then I set to work. Previously I had used both wire and paper yarn as the core, but I now decided to try using wire on its own.

However, without the paper yarn, the wire on its own provided less grip for the wrapping, which tended to slip more. The piece also had less body. So I went back to including paper yarn in the core.

I also found that the initial slippier core meant that the parts of the strips that were supposed to be flat started to curl over at the edges. (This was probably also caused by too much tension when wrapping on my part.) Although this was not intentional, I actually liked the increased movement caused by the curling, so I didn’t try to correct it. 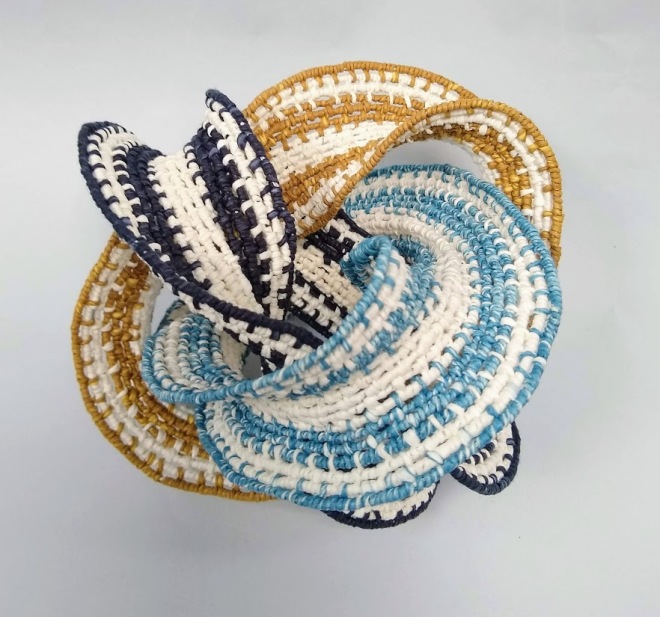 As a result, the final piece of interlocking Mobius strips doesn’t look anything like the paper mock up! But I’m OK with that.

And now for something completely different – well, almost

A couple of months ago I signed up for an online course with Australian basketmaker Catriona Pollard. The course was on making sculptural basketry with found wood, as I was really interested in finding out how to incorporate found objects such as wood into my work.

However, finding suitable pieces of wood was a bit tricky in the middle of London in August. There were alternatives I considered, but in the end I just started on the sculptural part, which involves twining.

I soon found out that twining with paper yarn produces a satisfying (for me) twist. So I’ve decided to go ahead without the wood for now and see what happens.

I have no plan for this – I just decided to start with five “arms”, like a starfish, and see how it developed. Sometimes they come together, sometimes they wind over or under each other, depending on how I feel. At the moment it’s fairly symmetrical, though it may not look like that in the photo.

Although twining is a different technique from coiling, I’m enjoying exploring how to achieve similar twisting and interlocking effects. Let’s see how it goes!

Happy new year! My first exhibition visit this year was CROP at the Sarah Myerscough Gallery in south London – a great start.

The exhibition focuses on artists who work with natural materials and traditional craft skills, combined with concern for the environment.

I was initially attracted by the inclusion of work by Tim Johnson, whose exhibition Lines and Fragments I have previously reviewed. More of his fabulous Keeping Time vessels were on show here. 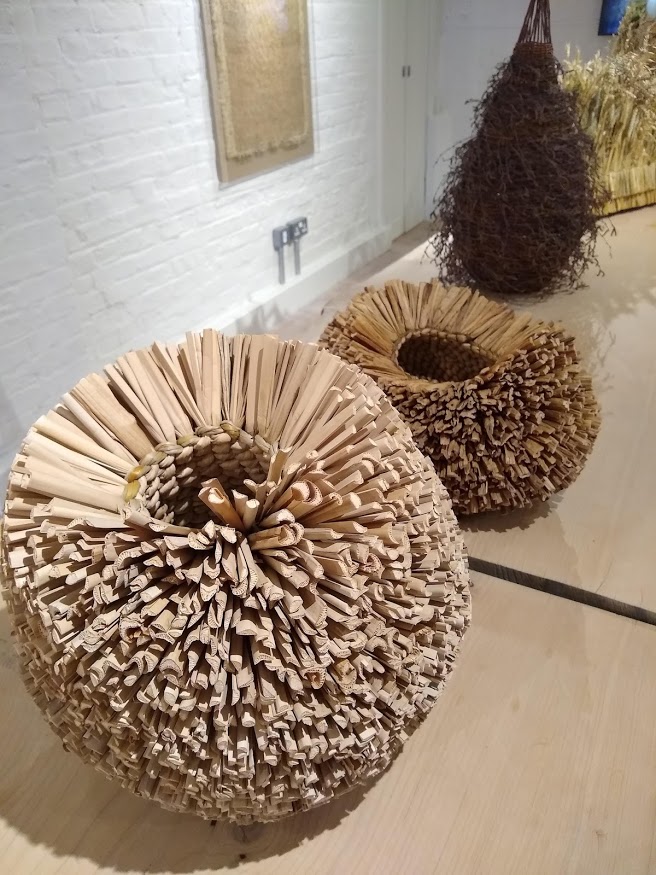 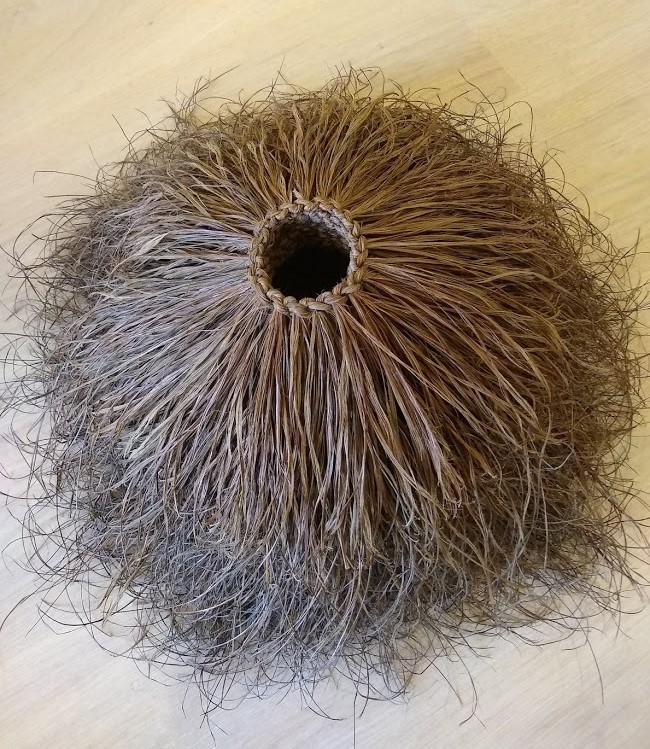 There were other familiar names too. Laura Ellen Bacon’s buff willow bench took pride of place in the window.

Diana Scherer grows textiles from plant roots – her work was featured in the V&A’s Fashioned from Nature exhibition a couple of years ago. 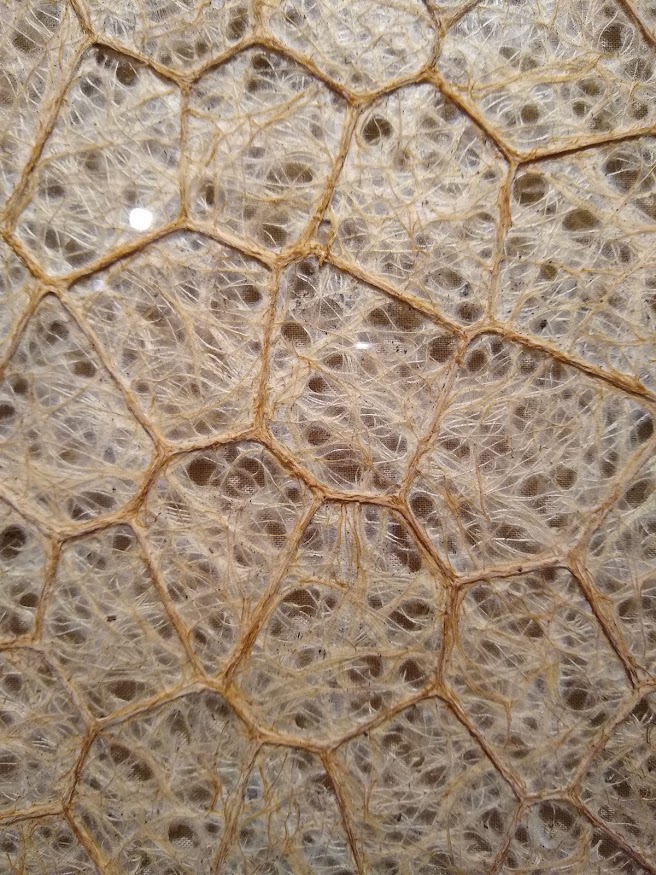 Of the artists that were new to me,  Naoko Serino stood out for her ethereal felted jute sculptures. 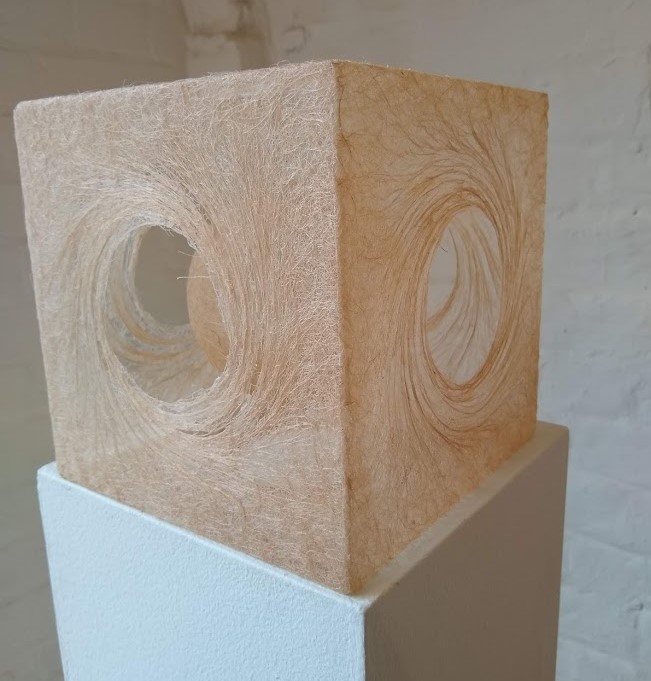 Soojin Kang uses jute too, along with silk and linen, in her wrapped, bound and knotted work. 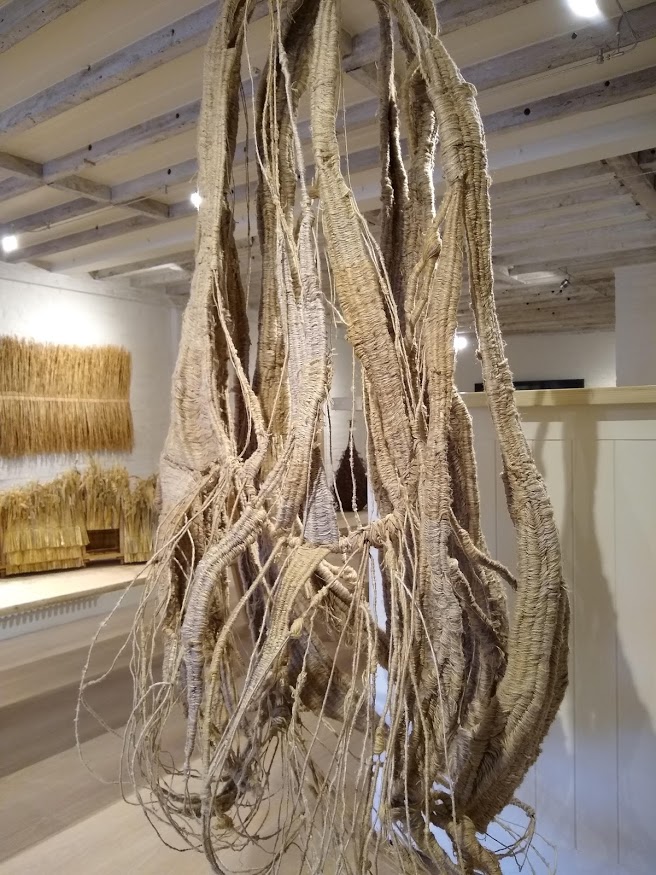 I also loved Caroline Sharp’s delicate pods  made from willow and birch retaining the catkins. 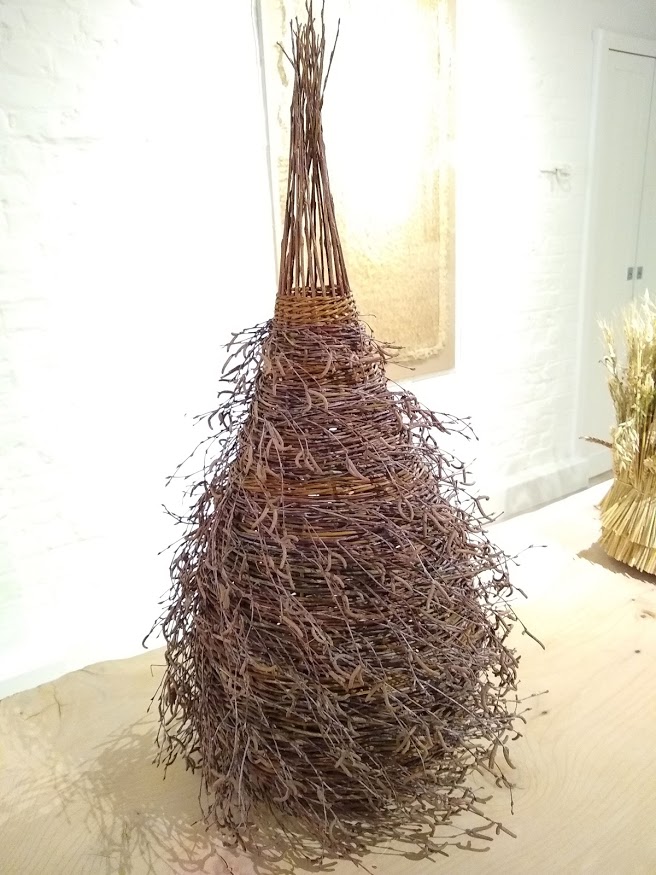 Not technically part of the exhibition but certainly worth a look are a couple of ceramic vessels by Luke Fuller, who makes layered moulds which burn away during firing, leaving textured pieces reminiscent of rock fractures and geological faults.

Last week we finished the first module of the two-year basketry course at City Lit. The subject was plaiting, and the tutor was Polly Pollock. I missed the first week because I was on holiday in Uzbekistan, so as soon as I got back it was straight into a marathon strip-cutting session!

We started off with watercolour paper, as it is strong but flexible. However, we were encouraged to experiment with other materials and also to add overlays (extra elements threaded through after weaving the main basked) to add colour and texture.

The three main techniques we covered were bias plaiting, straight plaiting and skewed forms. We combined these with different borders – zigzag, flat and sandwich and sew.

Here are some of my practice samples made with bias plaiting using khadi paper, an old map, newspaper cordage and vinyl wallpaper. 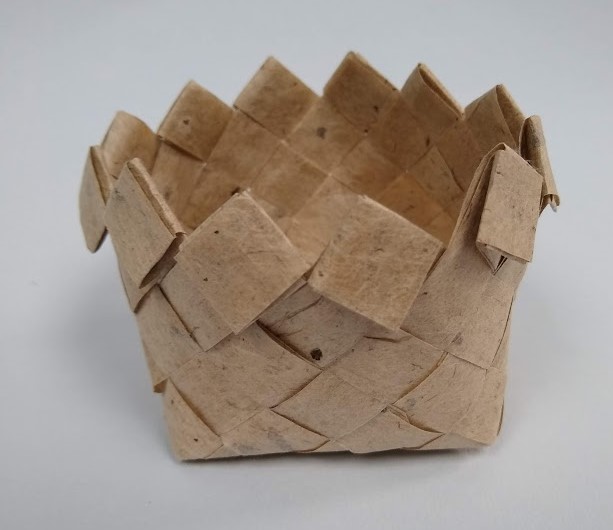 Here’s a straight plaited vessel made with watercolour paper. 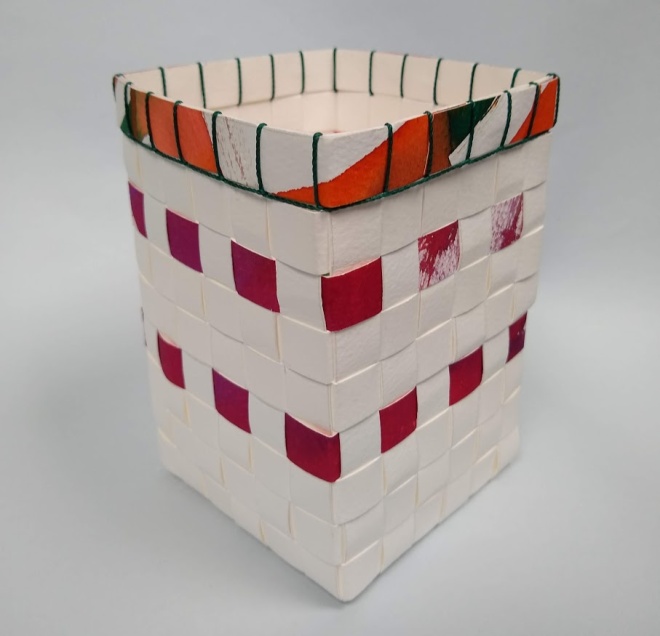 And here’s a skewed vessel, also made with watercolour paper.

For our final module assignment we had to make a series of three related pieces using some or all of these techniques, inspired by the modern architecture of Rotterdam.

I have to admit that this was a bit of a challenge for me, as my inspiration usually comes from natural rather than human-made forms. But even I got drawn in by the weird and wacky architecture of this Dutch city.

Here are the results, all made with watercolour paper, damp proof membrane and flattened corrugated cardboard.

I have to admit that the third piece, of a vessel within a vessel, was actually inspired by another building in London, and its spiky “haircut” was just a piece of whimsy on my part (though I could argue it’s supposed to be a roof garden 😉 ). It’s also not really tall enough, but I ran out of paper and time as it had to be finished for evaluation last week.

I really enjoyed this first module. It was quite intense – and hard work cutting all the strips! – and moved me out of my comfort zone.

This week we move on to willow, which I suspect will also be challenging!

I’m delighted to be taking part in Wandsworth Artists’ Open House for the first time this year with my friend Emma Gibson. The event runs over the first two weekends in October. 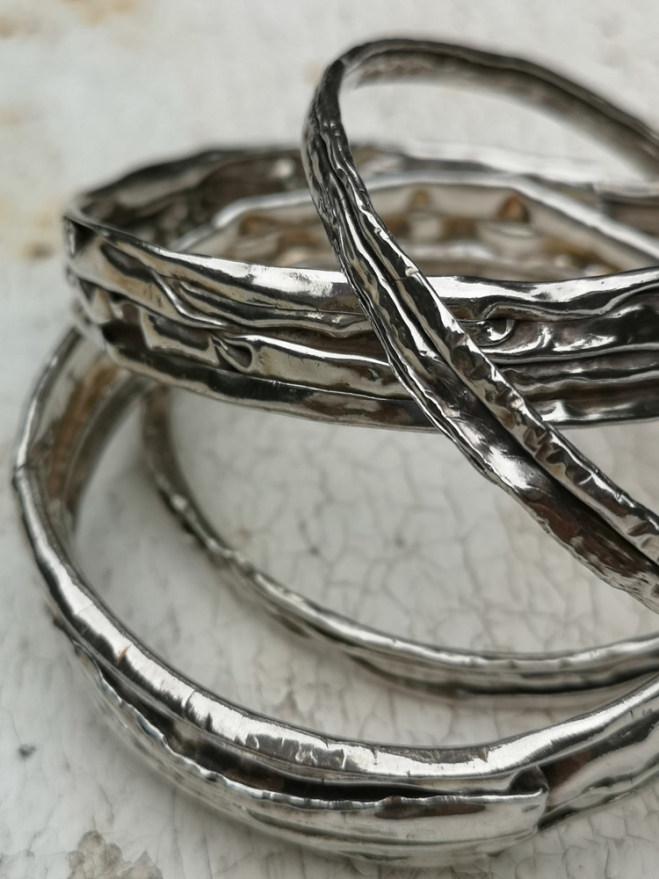 She works mainly in silver, combining traditional and experimental techniques to produce bold pieces, which often retain the texture of the hammers used to forge them.

Emma allows for an element of chance in her work so that even if a design is repeated each piece remains individual.

I will be showing and selling some of my basketry work – another first for me!

I will also have my latest batch of upcycled indigo and ecoprinted accessories and clothing.

Hope to see you there!

Practically everyone who is anyone in the world of British basketry is featured in “Basketry – function and ornament” at Ruthin Craft Centre in north Wales, so it’s well worth making the effort to visit this wonderful, inspiring exhibition, curated by Gregory Parsons.

As the title implies, the show includes everything from beautifully made functional baskets to pieces whose impact relies more on form than function. I must admit that I tend to be drawn towards the latter in the selection below.

“Basketry – function and ornament” runs at the Ruthin Craft Centre until 13 October 2019.

As you  may have gathered from all these recent posts on basketry, it’s an area in which I have developed quite an interest. So much so that I have signed up for the two-year City Lit basketry course. This is quite a commitment, but I’m really looking forward to starting on 19 September.

Look out for a few more basketry posts in future! 😉

“Understanding particular properties of particular plants during identification, harvest, processing, selection and finally making not only equips ourselves for making tasks in hand but also gives us a deeper connection to place and its complexity.”

The artist and basketmaker Tim Johnson has spent the past 25 years exploring the relationship between place and material, as this exhibition at the Crafts Study Centre in Farnham makes clear.

Take the series of 42 little bags simply hung in three rows on the wall (and I would happily take them, every single one). It’s a fascinating display of sampling – the same technique with different materials, or the same materials with different techniques. Each one is absorbing in its details and range of possibilities. 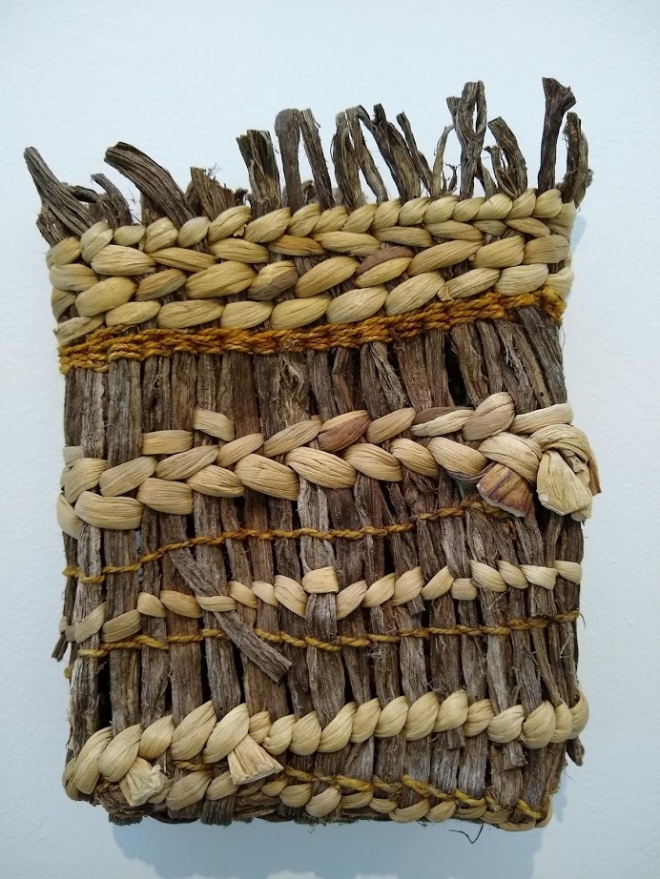 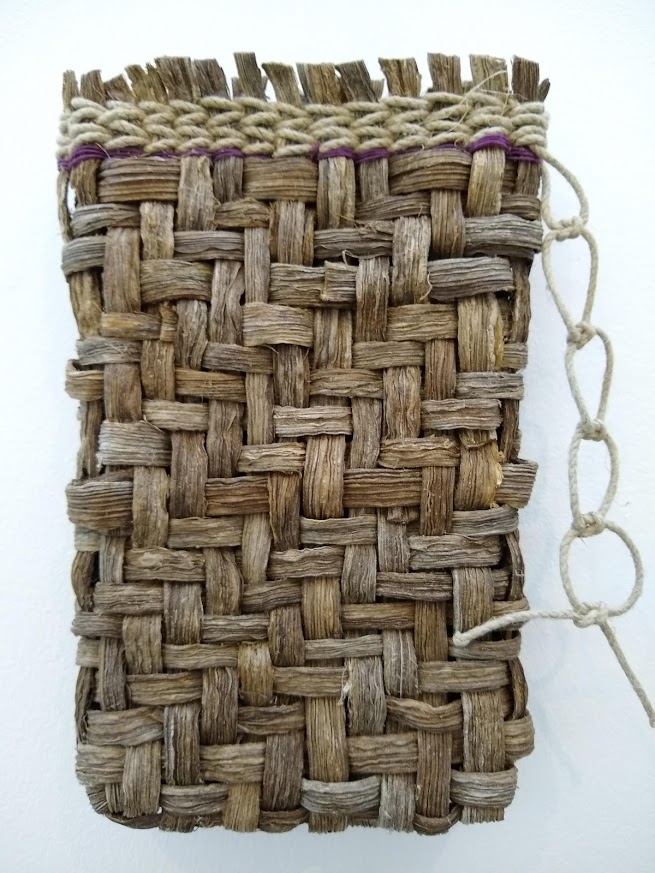 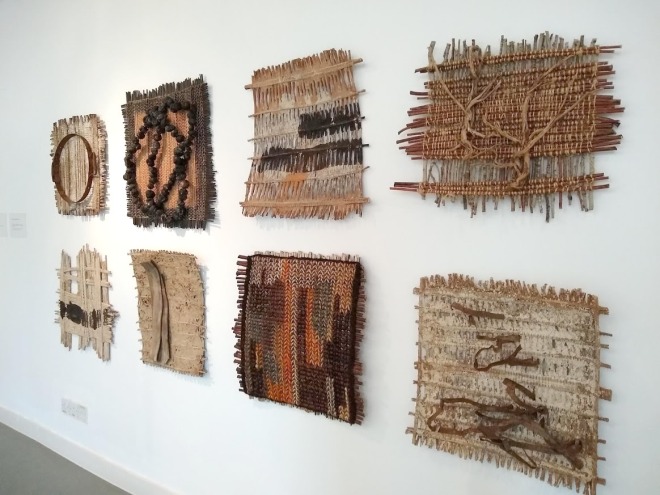 And his Curve series moves on with willow and earth pigments to develop the 3D form. 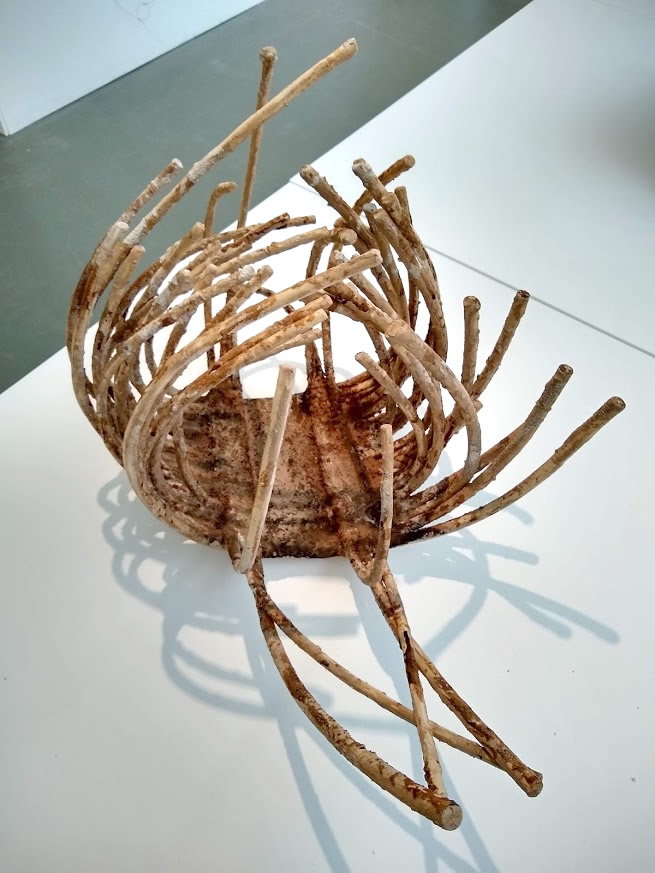 The Cortina works play with light and shadow – I particularly like the use of dried bean pods here.

My favourite pieces were  the Keeping Time baskets.

I particularly loved the cross sections of the bulrushes when close up.

Tim lives just outside Barcelona with another basketmaker, Monica Guilera, and there were some collaborative pieces on show. 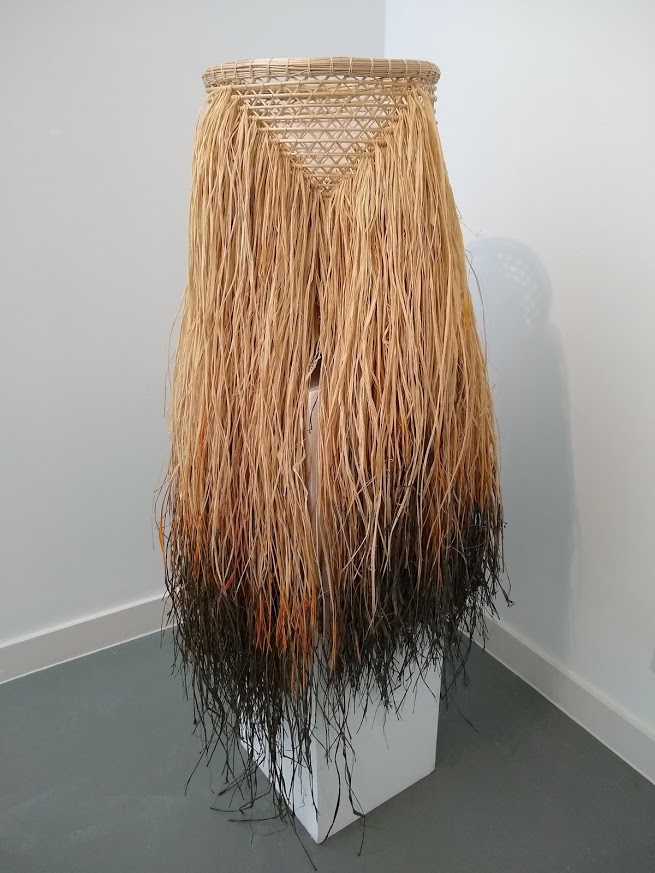 It was also interesting to see some of the sources of his inspiration, including a squashed lampshade found in the road. 🙂 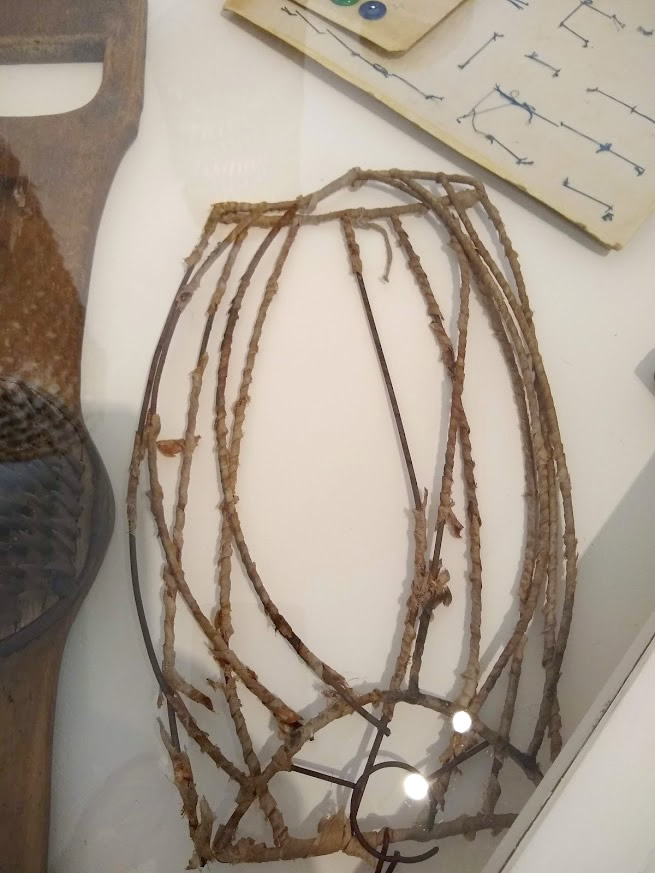 Lines and Fragments runs at the Crafts Study Centre in Farnham until 31 August 2019.

In a previous post I mentioned a course on coiled basketry I was taking with Polly Pollock at City Lit and described the different samples I had made.

The second half of the course focused on our own personal projects, developing the techniques we had learned to produce a piece or series of samples inspired by the seedpod theme.

My inspiration actually came from a piece of driftwood.

It reminded me of a sycamore (US: maple) seed, so I thought I would try to weave something around it to create the “wings”.

At first I tried wrapped linear coiling with paper yarn, but it felt too solid and heavy – this was supposed to represent a floating, spinning seed.

So then I tried a more open weave approach, using blanket stitch with cordage, still with paper yarn. This worked better but was a bit too large.

I tried changing materials, using a thinner cordage and enamelled wire for the blanket stitch. This was much better!

There was still more experimenting to be done with varying the tension of the stitch to evoke the marks and form of the seed, but I finally got started. 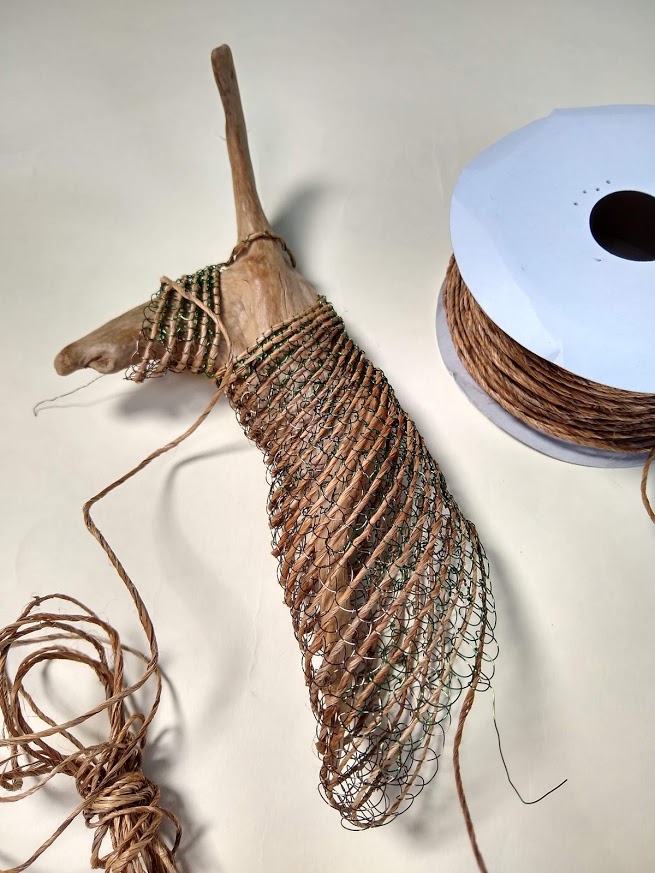 As ever, it was fascinating to see the very different pieces that everyone produced. I don’t have permission to post photos of others’ work, so you’ll have to take my word for it! But it was a fantastic course and I would highly recommend it.

There is also an exhibition coming up of work by students who are completing the two-year City Lit diploma in basketry. It’s at the Espacio Gallery in London from 23 to 28 July. I’ve seen some of the work on Instagram and it looks well worth a visit!