In November last year I attended a hexagonal weaving workshop with Polly Pollock, where we made hexagonal baskets. At the end of the workshop Polly demonstrated how to make a woven ball using flat cane, but we didn’t have time to try it ourselves.

A few weeks ago I came across a pile of discarded plastic strapping – the type used to secure boxes to wooden pallets by delivery companies. It was about the same width and thickness as the flat cane, so much to ESP’s horror, I decided to take it home and have a go at making a woven ball. (His horror was largely due to the fact that I didn’t have a bag at the time, so he had to carry it. 😉 )

Hexagonal weave actually lies flat, so to get a rounded structure you need to use pentagons rather than hexagons. I started by using five lengths of strap to create a pentagon. 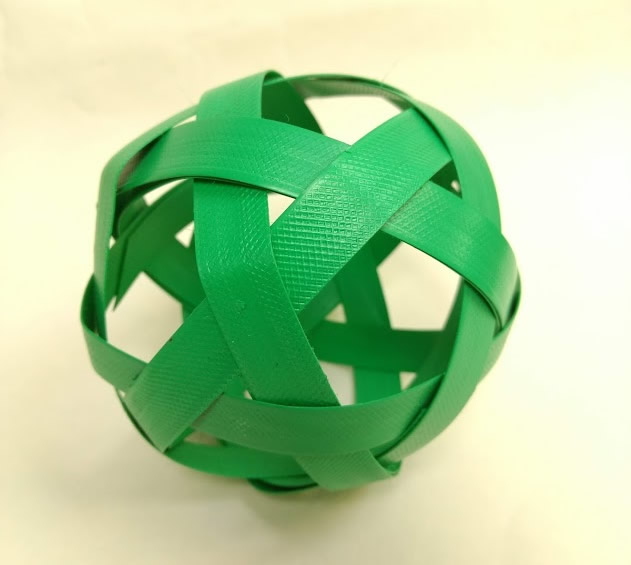 After finishing I posted the final result on Instagram, whereupon someone asked if I’d tried making the 10-strand sphere! Not being one to shirk a challenge, I went off and found the instructions for this.

I started off with a pentagon made from five straps again, but this time added five more straps to surround the pentagon with a layer of hexagons rather than pentagons. After that it’s a case of working out where the other pentagons go: each pentagon is surrounded by hexagons. It was very satisfying to finish this! 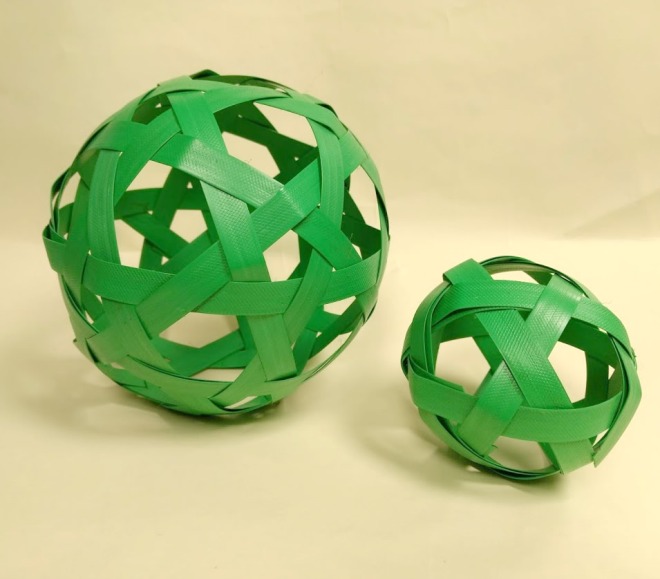 Talking of recycling, I will be taking part in The Good Life: Revive, Recycle, Restore at the Weald & Downland Living Museum on 5 and 6 May (bank holiday weekend). I will be selling my garments and accessories upcycled with indigo and ecoprinting.

The museum is a fascinating collection of rescued rural homes and buildings spread across 40 acres of the South Downs, and this themed special event includes a fashion exchange, upcycling demonstrations, a repair cafe and various talks and taster classes.

I spent yesterday near the Ashdown Forest in Sussex doing a hexagonal weave workshop with the lovely Polly Pollock. We were working in the cosy studio of another basket maker, Annemarie O’Sullivan, as the squally showers drenched the garden and fields outside.

Using flat cane, Polly started by showing us how to make the base of the basket. Weaving in three directions (triaxial weaving) looks a little tricky but if you remember some basic rules it should be OK.

To form the sides of the basket you need to create corners, which require pentagons rather than hexagons.

Then it’s back to hexagons and business as usual. 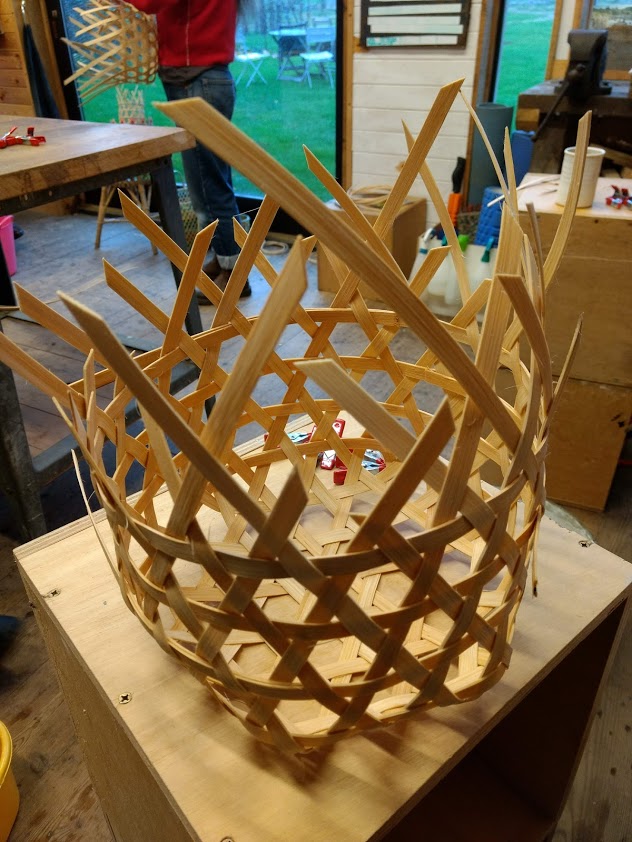 The trickiest part is finishing off. I made my first acquaintance with an Archimedes drill (if you pierce cane it tends to split) and after a bit of nerve wracking precision cutting it was complete!

Here are all our baskets lined up, finished with different coloured chair cane – guess which one is mine! 🙂

Depending on where you place the corners you can produce different shapes.

And of course you can used dyed cane too.