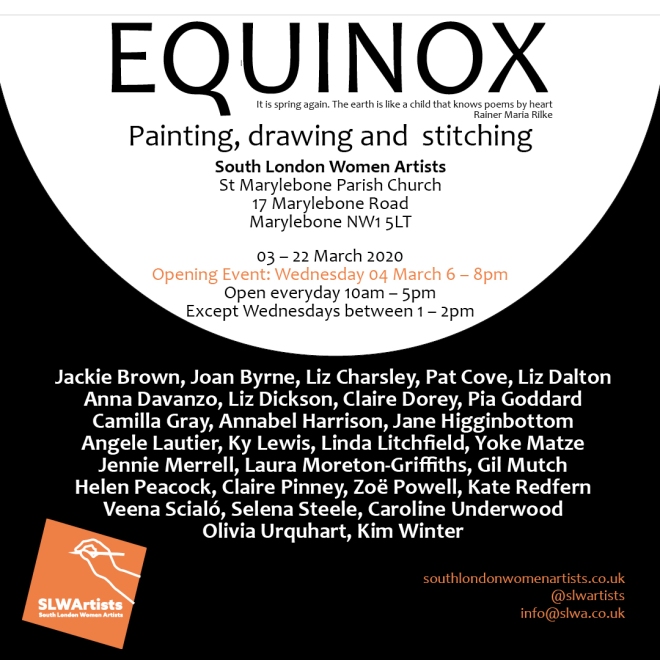 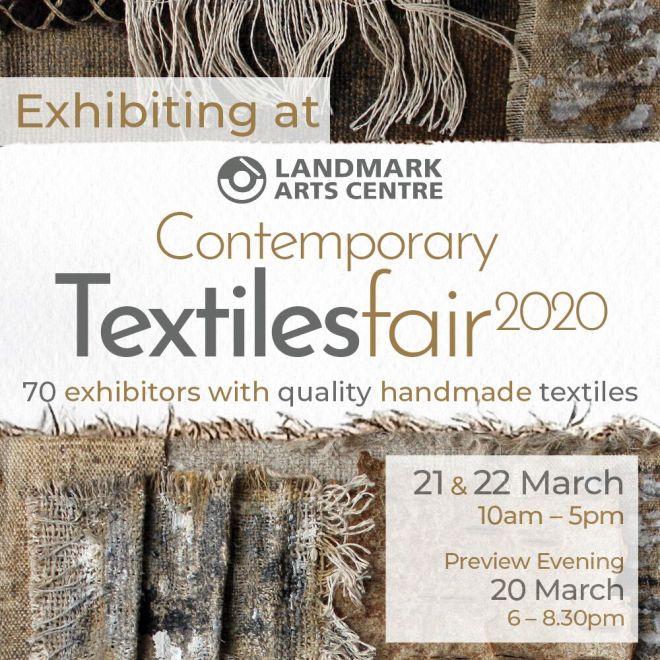 As someone who does quite a lot of tie dye, or shibori, I’m slightly embarrassed to admit that I hadn’t heard of Marian Clayden before visiting this exhibition at the Fashion and Textile Museum. Yet her skills – and influence – extended well beyond dyeing – for example, her work was behind the widespread popularity of velvet devoré in the 1990s (I had several scarves!).

Clayden was born in the UK and went to Nottingham School of Art. But it wasn’t until she emigrated to Australia in 1962 that she took up dyeing, teaching herself from a book. She then moved to California and was commissioned to produce all the textiles for tours of the musical Hair.

Her work from this period very much reflects the palette of the period, in purple, orange and brown – but the painterly effects she produced are far from common. 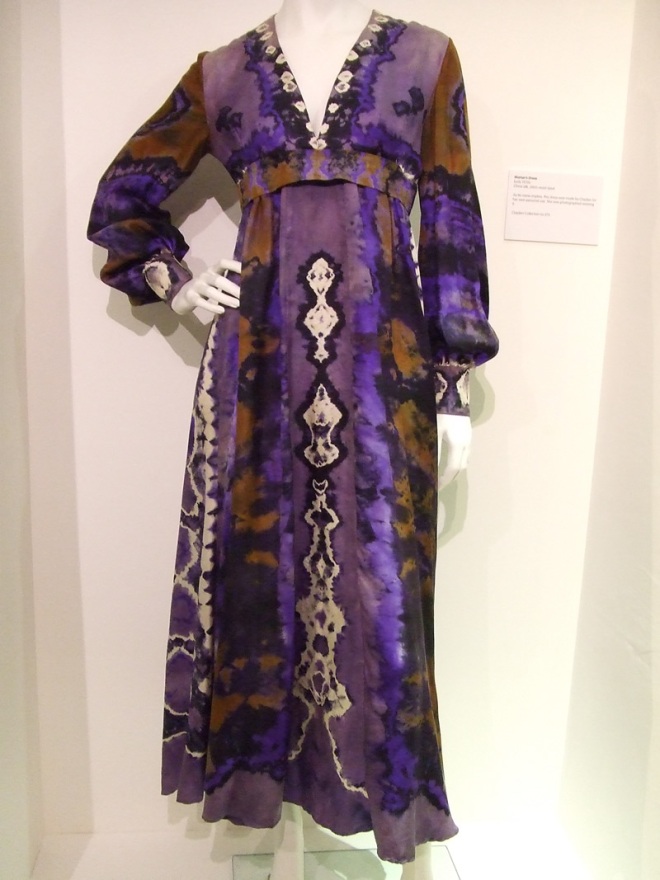 These dresses were made using stitch resist (nui shibori), which normally produces broken lines – so I suspect that after stitching and gathering the fabric she then bound over the top of the stitching.

After receiving a grant from the National Endowment of the Arts in 1971 she was able to scale up, producing large hanging pieces of silk using several stages of stitching, dyeing and discharge. 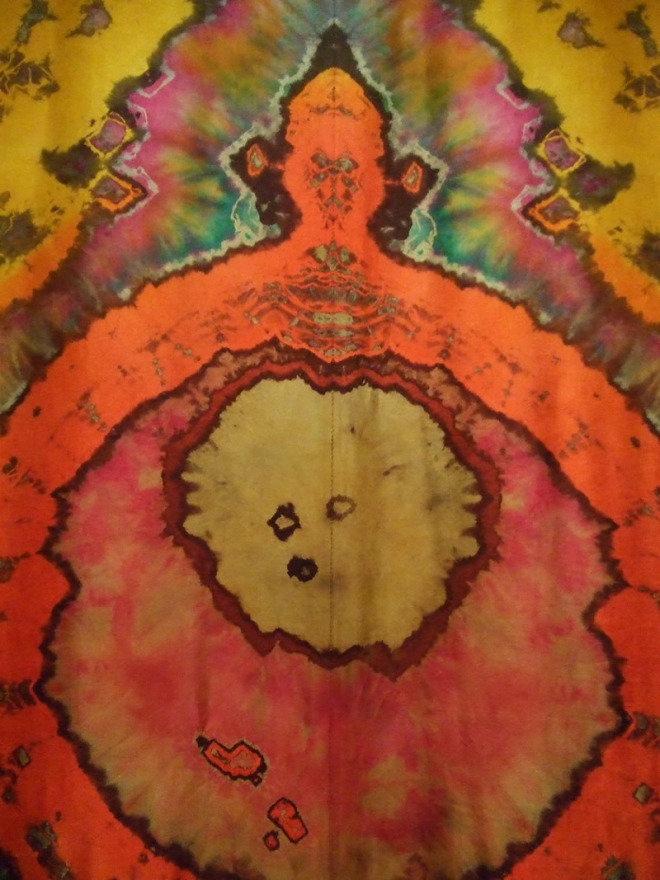 My favourite from this period was cotton rather than silk, in more earthy colours of blue and ochre – a detail is shown below. 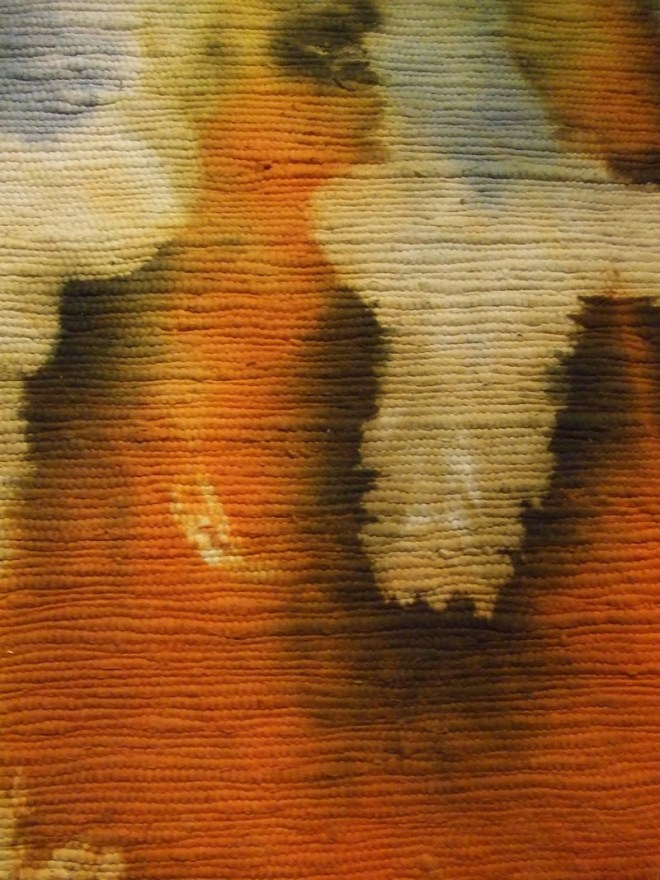 In the mid-70s Clayden developed an interest in clamped resist (itajime shibori) and discharge dyeing – most of these pieces in the exhibition were from later periods, like this silk organza coat from 2001. 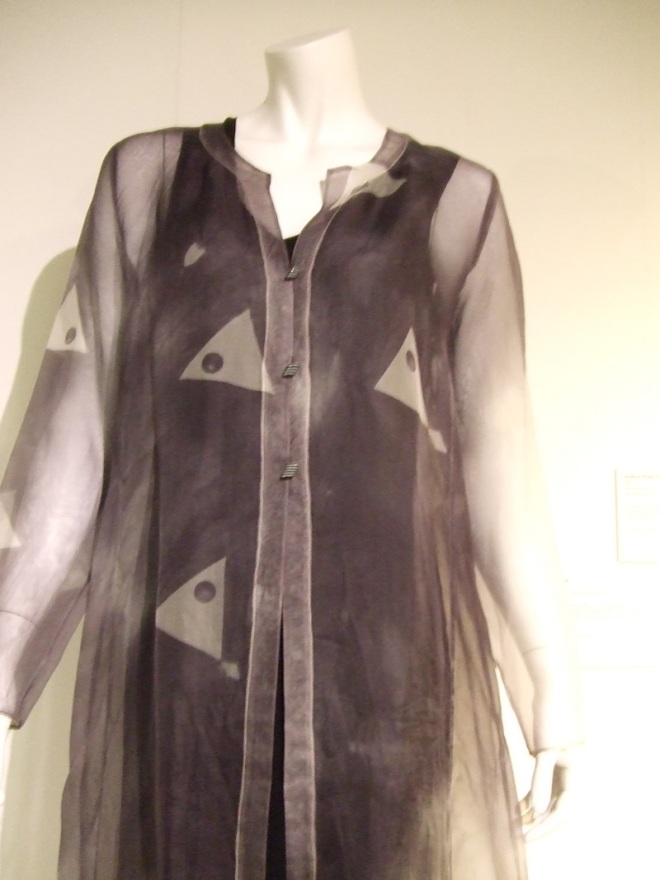 She also became increasingly interested in texture, experimenting with non-loom weaving. This stunning hanging consists of ropes made from cotton roving, dyed, discharged and hand plied. 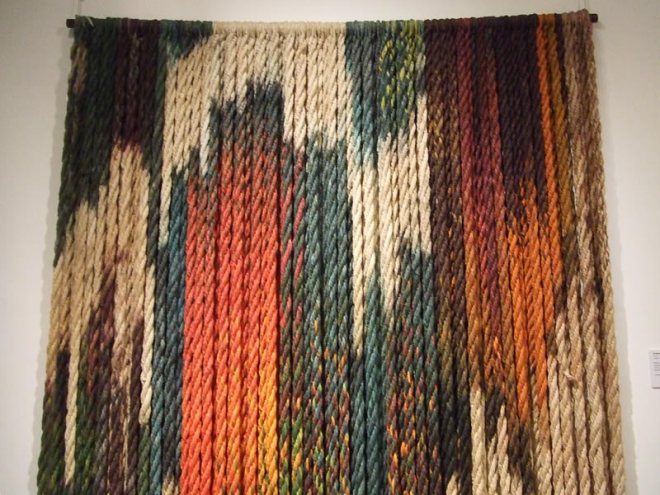 Her innovation continued throughout the 1980s, perhaps best exemplified by her “toaster print”, originally produced by coating the ridges of a sandwich toaster with ink, adding the fabric and closing the toaster. 🙂 You can see this on the tulip coat below. 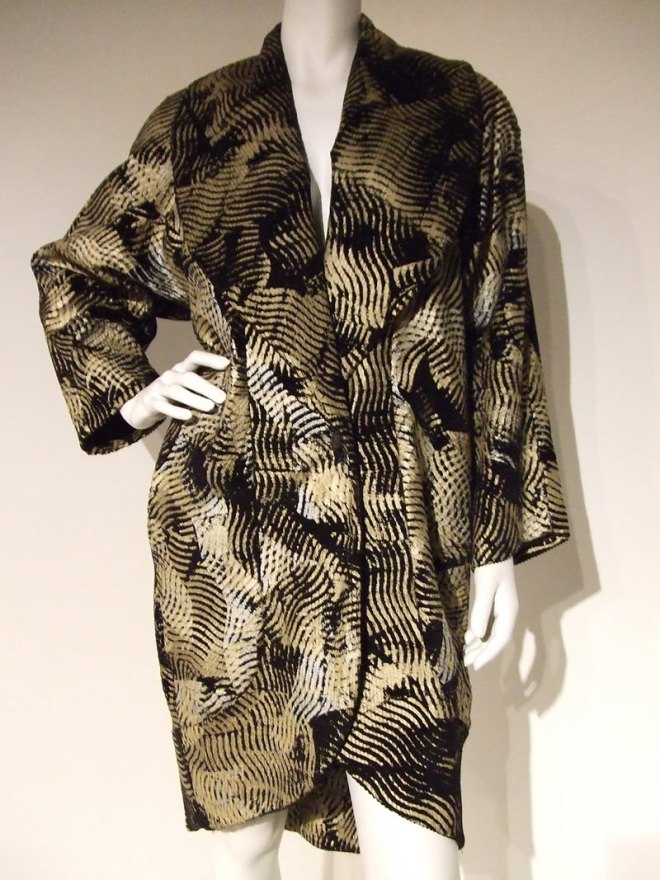 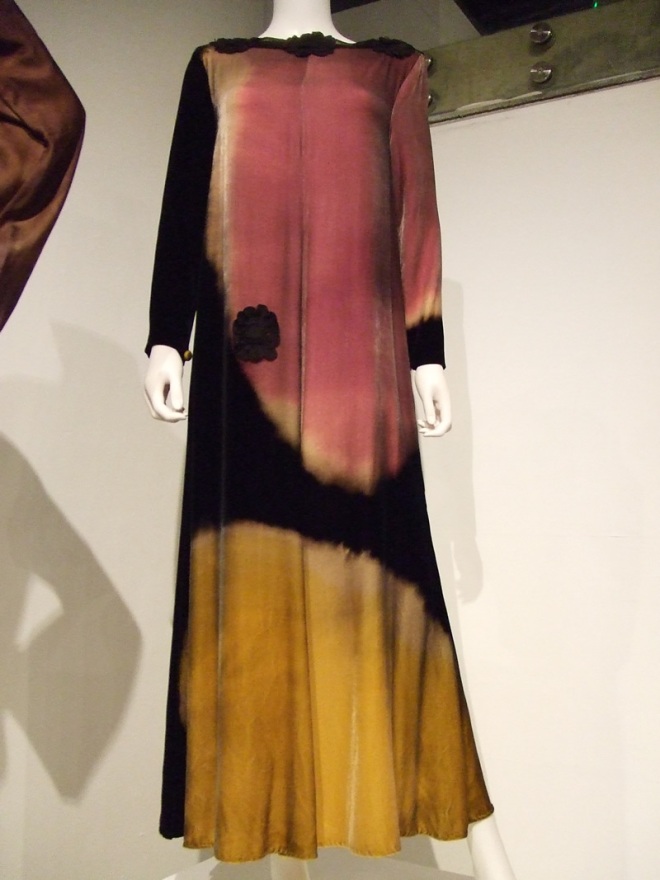 For me, two other pieces in the exhibition highlight Clayden’s global range of influences. The Japanese aesthetic clearly shows in these beautifully minimal “towers” of cotton strapping discharge dyed and wrapped around dowelling. They were inspired by palm trees wrapped in fronds that she saw in Hawaii. 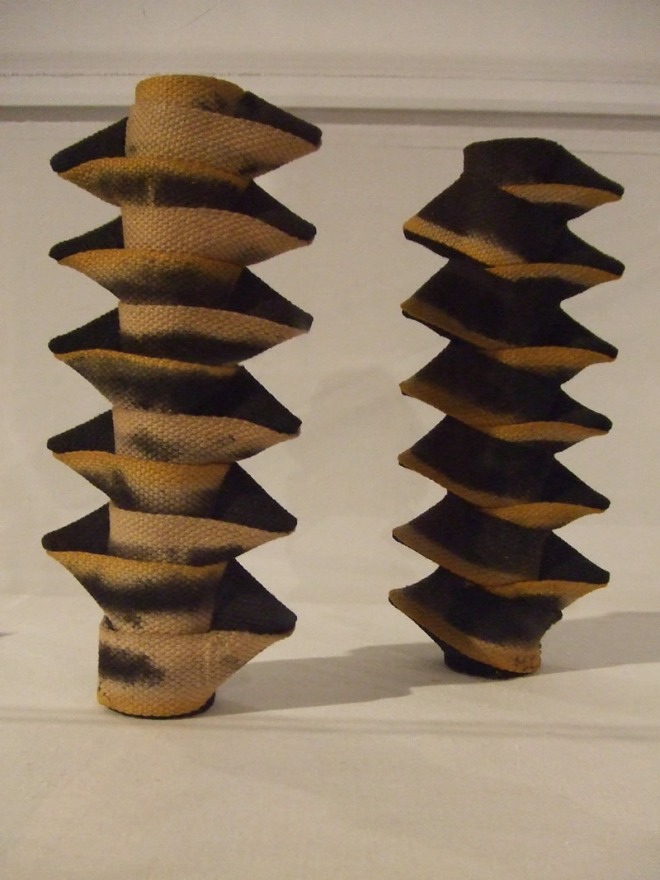 Then, in 1992, Clayden was invited by Aid to Artisans to work with felt makers in Hungary. The result was a series of felt hats and waistcoats, dyed, discharged and appliquéd. 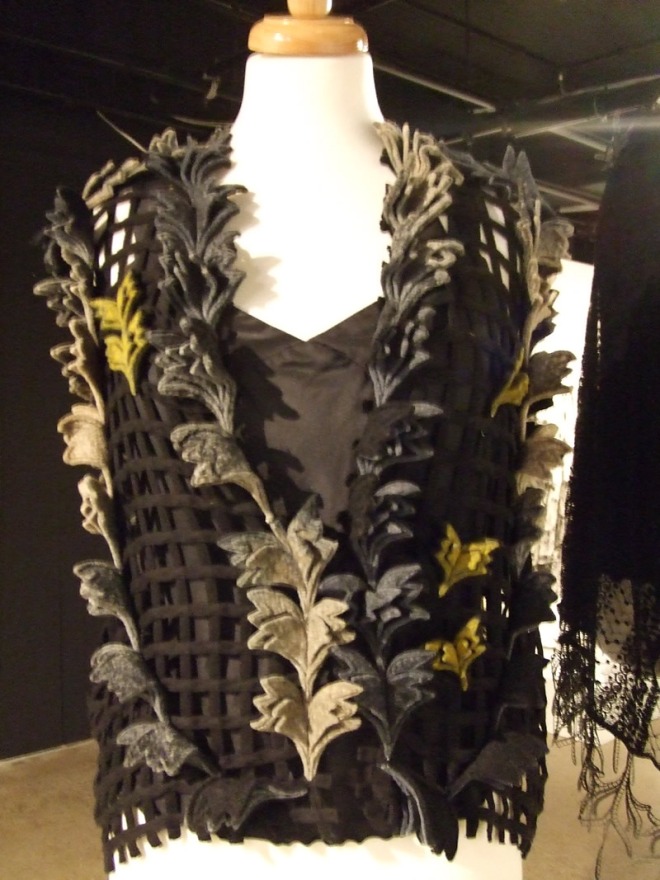 Marian Clayden Art Textiles runs at the Fashion and Textile Museum until 17 April 2016.

While waiting to be “activated” as a Games Maker for the Paralympics, I had time to try a couple of mokume experiments.

The first was a simple square on an old cotton bag. 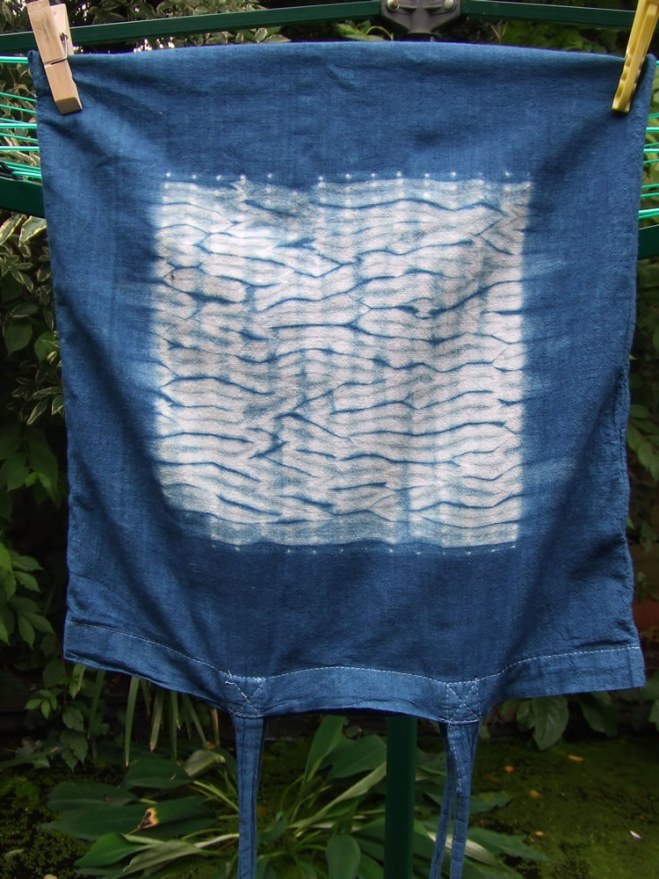 In the second, I wanted to try overdyeing mokume to get an ombre effect. This was more difficult than I anticipated, as the resist I attached to the centre part (first plastic, then masking tape) wouldn’t stick when the fabric was wet.

In the end I taped the centre part to a tube and dipped it. Because it was taped only on one side, the indigo partly bled underneath to create the ombre, or fading, effect.

This one was plain running stitch on a piece of cotton/linen fabric that had previously been dyed mid-blue with indigo: 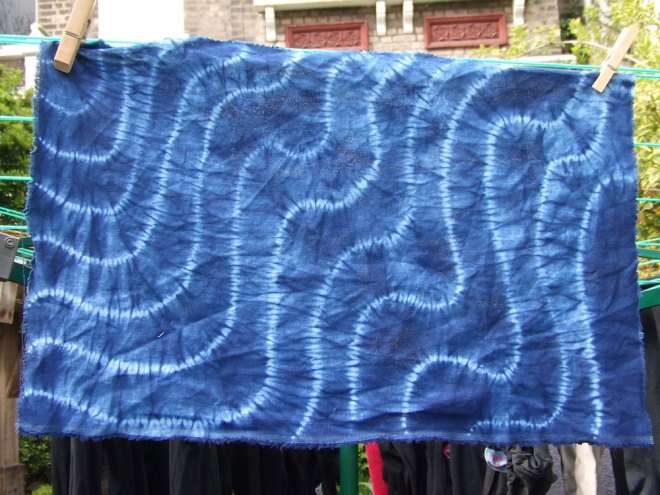 Then I tried combining stitch and ombre, using a Japanese larch pattern on cotton. This was a bit tricky because once the stitching is all drawn up, it’s difficult to judge the gradation of the ombre.

Also, the stitching contrast works best against a darker background (of course). But one of the other students said that she likes the way the pattern disappears due to the ombre.

Back to college tomorrow – will have to start thinking about what to do for the exhibition in July!

I haven’t had much time recently to concentrate on being creative. I’ve found from experience that if I try to rush through something in a couple of hours, it inevitably goes wrong and I end up wasting time and materials, so I might as well have done something else. Also – understandably – when ESP is on holiday he wants to go out and do things rather than sit and watch me making felt! 😉

So over Easter we visited a couple of exhibitions – David Hockney at the Royal Academy (absolutely brilliant) and the Hajj exhibition at the British Museum, which contained some impressive embroidered textiles.

This morning I finally found some time to tackle some of the lessons from the online shibori course – stitching a dragonfly and trying some ombre dyeing (graded colour).

Both these pieces were dyed with indigo on linen, dipped several times.

I also tried some ombre dyeing on a cheap scarf I bought in a charity shop for 99p. I don’t even know what it’s made of, but it has a very open weave. I folded it several times, and dipped it in a couple of different dilutions of indigo.