In the Summer 2015 issue of Tate Etc magazine, the artist Linder describes how she came to love Hepworth after a night-time visit to the artist’s garden in St Ives:

“As guests, we were encouraged to discover the sculptures purely through touch. Hepworth once said that every piece must be touched – that it was part of the way in which she made her work. So be it, Juno! Through stroking her sculptures in the dark, I fell in love after a lifetime of complete indifference to her work.”

Lucky Linder. For that is the most frustrating thing about this wonderful Tate retrospective of her work. The sweeping curves and flowing surfaces of her work cry out to be stroked, for your fingers to follow the lines and edges, to explore the hollows hidden in shadow. But imagining the cacophony of alarms that would set off, you have to sit on your hands and just look.

Her early work was more representational, like Doves of 1927, but was innovative because she used direct carving. The normal practice was for artists to make a model in clay and then give that to an artisan to carve. But Hepworth, along with her husband John Skeaping, Jacob Epstein and Eric Gill did the carving themselves without a transitional model.

It was when she moved from working in stone to working in wood that Hepworth’s style became more vertical and abstract, as in Torso from 1932. 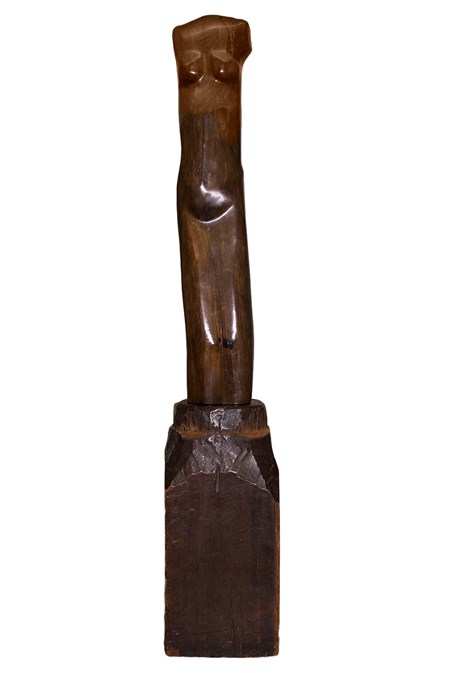 By 1932 Hepworth had separated from Skeaping and started sharing her studio (and home) with Ben Nicholson. Comparing their work from this period is fascinating, as Nicholson’s technique of incised lines is often echoed in some of Hepworth’s sculpture. They also worked on fabric designs woven by the Edinburgh Weavers.

The exhibition includes some wonderful sketches from 1947 of surgeons working in an operating theatre. In the exhibition catalogue, Lucy Kent sees distinct parallels “between the hospital drawings and the abstract sculptures that Hepworth made concurrently”, comparing “the sweeping, self-reflexive curves and interwoven caverns of Pendour” with “the same contained, purposeful movement as the hands depicted moving deftly together, around and within the patient”. 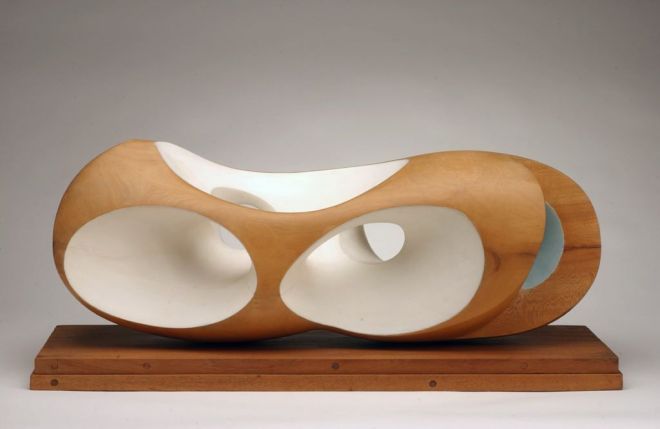 Some of my favourite Hepworth pieces date from this period, including Pelagos and Wave. 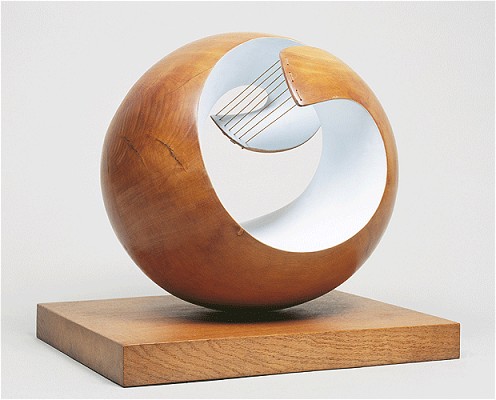 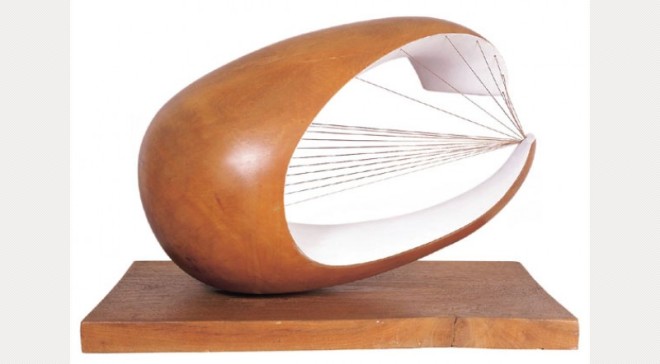 I also love her guarea series, carved in the mid-1950s after she was given 17 tons of the tropical hardwood. This allowed her to work on a much larger scale. Peering through the spiralling internal cavity that burrows through Corinthos feels oddly intimate – as if this is what it’s like to be inside a snail shell.

Hepworth had a very strong sense of how her sculptures should sit in their environment. There is a fascinating section on how, in the days before Photoshop, she experimented with photography, using double exposures (one of which graces the catalogue cover) and superimposing photos of her work against different backgrounds of landscape or buildings to evoke how it would look if commissioned on a larger scale.

The exhibition ends with a selection of her bronze pieces shown at the Kröller-Müller Museum in the Netherlands in 1965.

Barbara Hepworth: Sculpture for a Modern World runs at Tate Britain until 25 October 2015.

It’s official – I am an artist! 😉 Earlier this week I applied to join South London Women Artists, and I just heard that I’ve been accepted.

There are those who high-mindedly maintain that an artist is someone who paints, draws or (occasionally) sculpts. I don’t do any of these, but Joan, my sister Woman of the Cloth, who is a weaver and already a member of SLWA, encouraged me to apply.

Fortified by this acknowledgement of my status, I hot-footed it off to Tate Britain to see the British Folk Art exhibition. Now, the Tate is not exactly overflowing with textile art – the last time I saw this many textile works in a show was at the Alghiero Boetti exhibition at Tate Modern.

This “art vs craft” distinction has been around a long time, of course. When the Royal Academy was established in 1769, it explicitly ruled that “no needlework, artificial flowers, cut paper, shell work, or any such baubles should be admitted”. I wonder how they would classify Tracey Emin’s embroideries or Grayson Perry’s pots.

The feminist in me suspects that this was another way of excluding women from the hallowed halls of the art establishment, but I learnt from this exhibition that embroidery used to be a trade that employed both men and women, and that membership of the Worshipful Company of Broderers used to be restricted to men.

And the textiles made by men in this exhibition are certainly impressive, especially two large-scale patchwork pieces.

The first is by James Williams, a tailor born in Wrexham in 1818, who spent 10 years producing an inlaid patchwork of eclectic motifs made up of 4,525 separate pieces of cloth. It includes Adam (no Eve!) surrounded by a menagerie of creatures such as a giraffe, a toucan and an elephant; Jonah being swallowed by the whale; a steam train crossing the Cefn Railway Viaduct; and a Chinese pagoda. 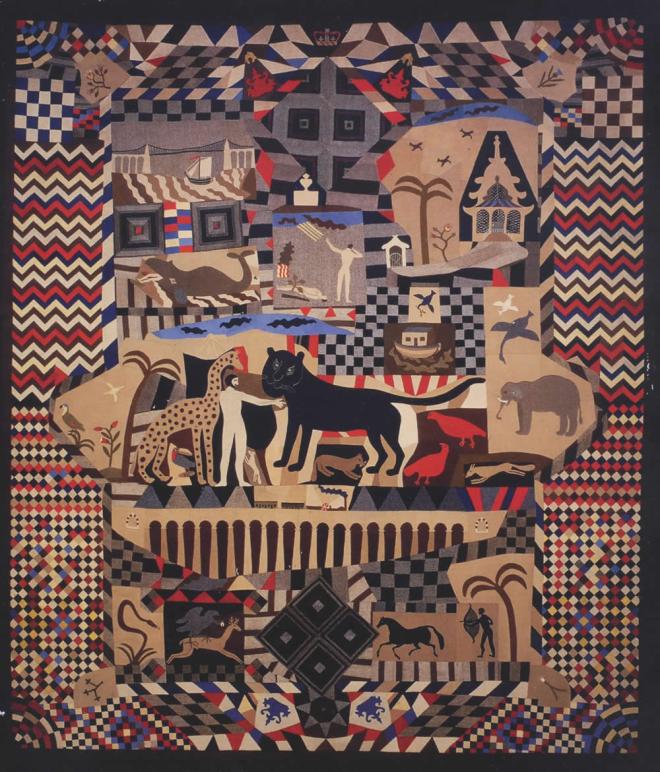 The second is a Crimean War quilt, made from more than 10,000 individual pieces of coloured wool serge from soldiers’ uniforms. The British government promoted quilt making as a pastime to distract soldiers from alcohol and gambling during long periods of inactivity and also as therapy in military field hospitals and convalescent homes. The intricate geometry must have required extreme military precision, as well as considerable strength, given the thickness and weight of the cloth.

A slightly more modern patchwork piece also has a military connection – the Jolly Roger for the submarine HMS Trenchant, made around 1943.

Smaller pieces include amazingly elaborate sweetheart pincushions, made by soldiers and sailors while on duty and sent home as objects of their love. This was also a tradition that started during the Crimean War; by the time of the First World War the pincushions included preprinted ribbons bearing messages such as “Think of me” and featured details such as the serviceman’s regiment or division.

Another extraordinary military piece is a circular embroidery from 1918 listing all the names of the 1st Middlesex Regiment who were awarded military honours during the First World War. In the centre are those who received the highest decoration, the Victoria Cross, while the other names are embroidered in different colours in concentric circles.

The military notwithstanding, embroidered samplers in the 18th and 19th centuries are more traditionally associated with female domesticity and piety. But, perhaps as a way of subverting the restrictions they were under, some women did not limit themselves to religious verses or records of family occasions: on show here are several samplers illustrating the counties of England and even the relation of the planets in the solar system.

Two individuals get special sections to themselves. George Smart (c 1775-1845) was a tailor in Frant, near Tunbridge Wells, who became famous for making pictures from textile scraps. His fabric collages of the local postman leading his donkey or an earth stopper (someone who blocked a fox’s earth the night before a hunt) falling off his horse were stuck onto hand-painted or lithographed backgrounds and earned him a considerable reputation and royal appointment. 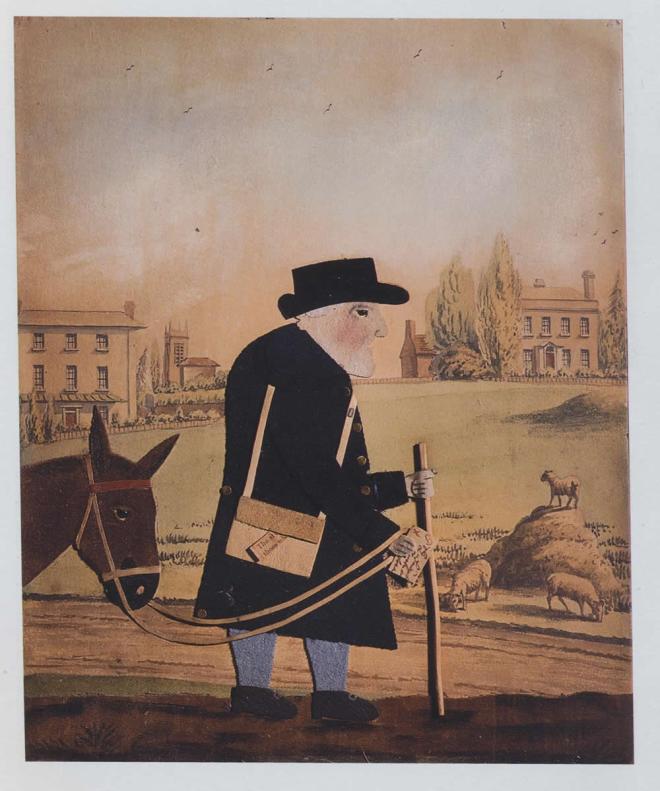 And Mary Linwood (1755-1845) was once regarded as one of the leading artists of her day. Her skill was in reproducing paintings as embroideries – she called them “needle paintings” – using different lengths of stitch to emulate brush strokes. Copies of works by Sir Joshua Reynolds, Thomas Gainsborough and John Russell are on show. She had a permanent gallery in Leicester Square for 50 years and was even mentioned in Dickens’ David Copperfield. 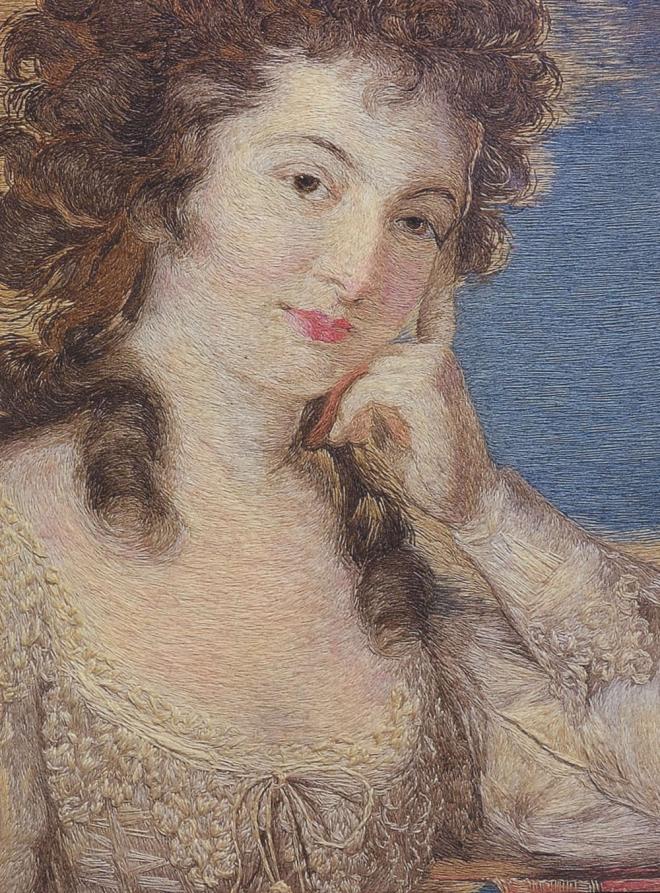 However, after her death she fell out of favour, as art came to be associated more with originality and creativity. As the exhibition notes: “She remains largely unclassifiable, lacking the originality demanded of the fine artist, and the ‘authenticity’ of the folk artist, yet also disconnected from domestic craft traditions.”

British Folk Art runs at Tate Britain until 31 August 2014, after which it will be at Compton Verney in Warwickshier from 27 September to 14 December 2014.