A bit of a rush

June has been a bit of a rush – literally, for we started our rush module at City Lit. It’s an interesting material, quite spongy to work with, but surprisingly strong. And when it’s fresh it comes in all sorts of lovely shades of mottled green, brown, and yellow, but apparently over time it all fades to a straw colour.

We started by making a mat with a classic rush construction: a square checkweave centre surrounded by twining, which makes it circular. The stakes are threaded away at the border, which can be a bit of struggle if the rush is thick, but it is surprisingly manoeuvrable with a rush threader (like a giant needle). At first I thought I would leave loops around the border, but then I changed my mind and pulled them all the way through!

We then progressed on to making a bowl, using the same technique but shaped around a mould (another bowl). This is very important to create a regular shape, as you will find out later!

After that I spent some time experimenting with rush. There is a book called Textiles and Weaving Structures by Peter Collingwood, a weaver who analysed various woven textiles to see how they were constructed.

There are lots of fascinating insights into textiles from around the globe, including some that I thought could be adapted for rush.

They included this fan from India. The plaiting was fairly straightforward, but I found it tricky to keep the wrapping tight on the handle. 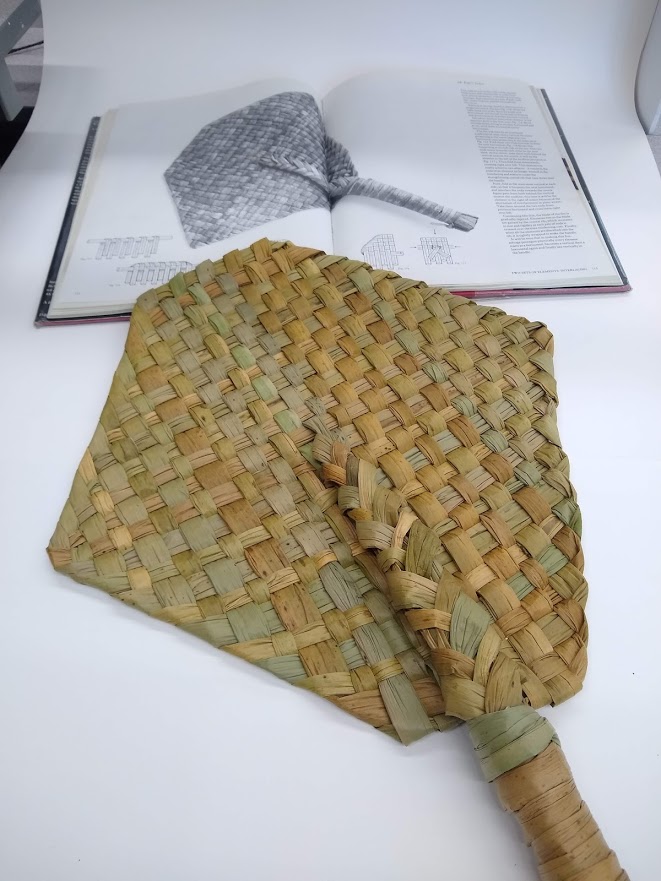 I also tried this intriguing sieve, which is woven flat and then opens out into a cone. It looks as if it will never work – but it does!

Finally, I had a go at weaving a spiral base, inspired by a Greek wastepaper basket. I never got any further because I ran out of time, but the concept has been proved! 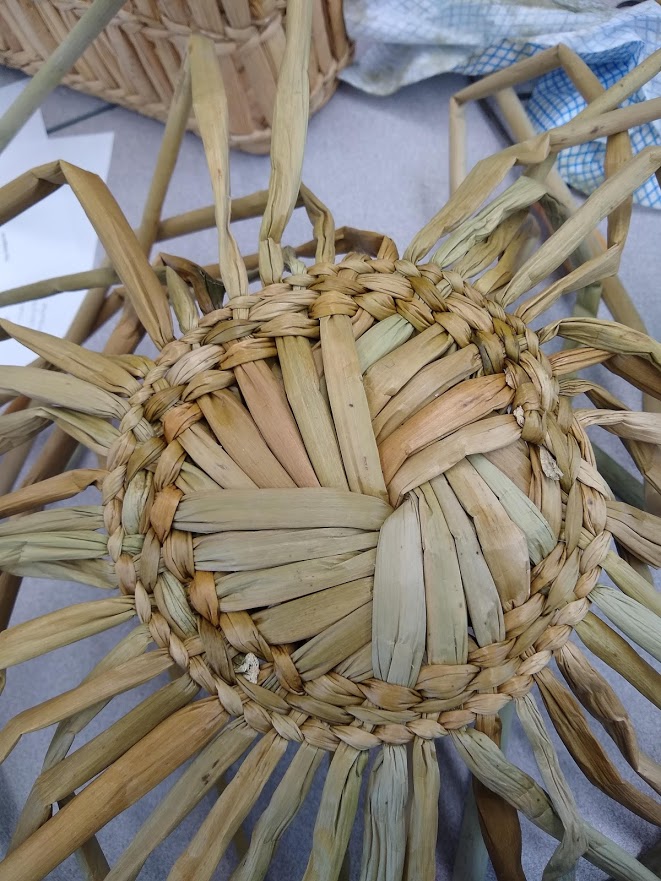 The Commons: Re-enchanting the World

Last month, Catherine Morland, an artist and former basketry student, contacted John Page, one of our City Lit tutors, about The Commons: Re-enchanting the World project. This highlights the complex histories of land ownership, gender rights, labour, and the wage economy as well the decline in communal life and subsistence living. She was looking for basketmakers to make bread baskets  for the launch meal in September. The baskets will be displayed in the Museum of English Rural Life for a month and feature in a publication about the project.

Jo, another City Lit student, and I, along with John, decided to make bread baskets for the project. Because the project was about common land and shared resources, I decided to use foraged materials, including cordyline leaves for the stakes, and cordage made from day lily leaves, daffodil leaves, and crocosmia leaves.

However, this was before we started the rush module and before I knew about the importance of using a mould to get a regular shape. As a result, the first one I made was terribly wonky. I couldn’t decide whether it was just charmingly rustic or simply crap – but after I made a second one around a mould I decided it was the latter!

And here are all three bowls – John’s rush bowl is at the top, and Jo’s straw bowl is bottom left.

Talking of foraging, it’s peak bindweed season at the moment, so I’ve been harvesting like mad, turning tangles of foliage into coils, ready to weave with.

After a long break, private workshops have started to resume, and I spent another very enjoyable day with Nicki Rowling of Willow and Yoga, making a tiffin bag. Because it has a wooden base, it’s quicker than if you have to make the base as well, and it’s very sturdy. It’s the perfect size for a phone, purse, sunglasses and bottle of water, and I love it! 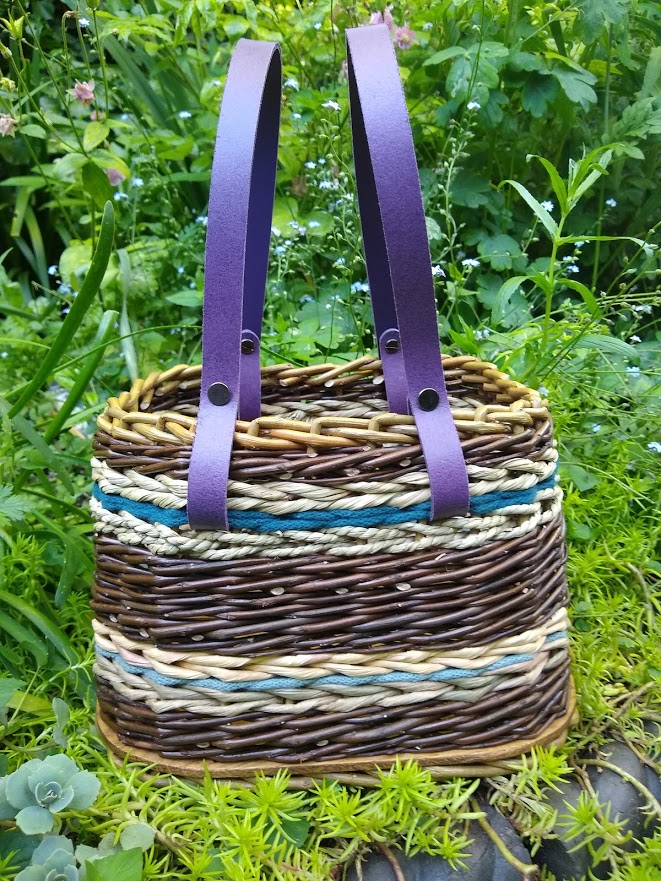 Nicki’s woodland studio is all off grid, with no electricity or running water, and compost toilets. It’s difficult to believe you’re just outside Dorking! 🙂

I’ve also signed up for a short four-week course on contemporary willow basketry now that the first year of my City Lit creative basketry course has finished (having taken two years!). I’ll report back on that next month.

After months of being confined to barracks, ESP was climbing the walls, so we decided to sneak in a quick six days in Scotland between basketry classes. The weather was glorious, as was the scenery, and we even spotted seals off the coast.

I’m not going to bore you with all my holiday snaps, but I must just tell you about the Highland Folk Museum outside Kingussie. This open air living history museum features a collection of relocated buildings, including “Baile Gean”, a unique reconstruction of an early 1700s Highland township. These buildings were particularly fascinating, with foundations of stones supporting turf walls, thatched with heather. The texture of the lichen and heather was rather lovely.

There were also a few baskets around, including coiled straw baskets (now critically endangered) and a mudag, a rugby-ball-shaped basket for holding carded wool.

And of course there were also some highland cattle – what’s not to like? 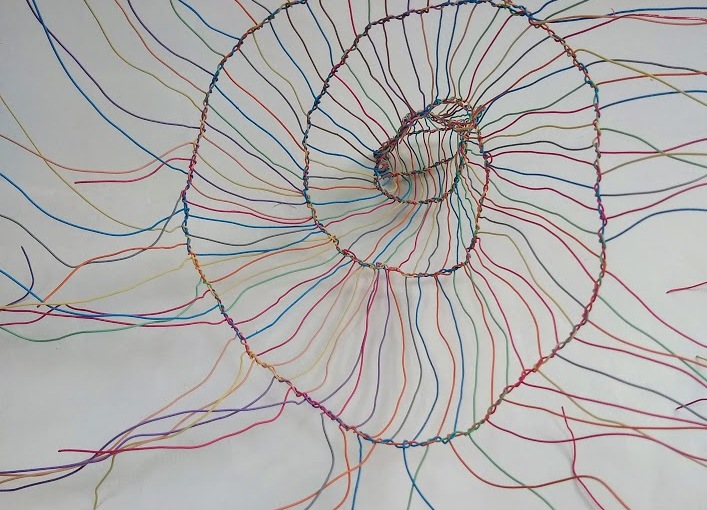 For the past few weeks my creative mojo has been curled up in a little ball somewhere under the duvet and refused to come out. It started with a relative’s sombre funeral (nothing to do with covid-19) and continued through the agonisingly drawn-out US elections (when all I wanted to do was sit in a corner and knit while watching CNN). Now I just seem to be in a state of general lethargy.

The first lockdown in March/April was quite a fruitful creative period for me. With exhibitions and shows cancelled and no deadlines to meet, I was able to rediscover the joy of creative play and experimentation. This time round it’s a bit different – the thought of a long dark winter with no or few opportunities to meet up with friends, visit exhibitions and restaurants, or travel anywhere is dispiriting, to say the least.

A little light in the gloom was a course in Burkina Faso plaiting with John Page, run over four consecutive Saturdays at City Lit – one of the few remaining courses that was held face to face rather than online. Because it counts as education it was allowed to continue, albeit with perspex screens, copious hand sanitation points and mask wearing.

Henrietta and Jo, two of my cohort from the two-year City Lit basketry course, also attended, so it was good to see them and catch up in person.

Traditionally in basketry you have upright stakes, around which you wind the weavers. But with Burkina Faso plaiting there is no distinction – the stakes and weavers are constantly changing places. And if you use rigid materials, such as cane or willow, it tends to produce a rather lovely spiral. With softer materials, which are easier to manipulate, you can also weave more regular rows.

We started with rattan (cane) and soft materials like sisal, to learn the basic technique. Because cane is a regular thickness along its whole length, it tends to form a cylinder, but the ends can be tied off to produce a vessel that could be used as a bird feeder or garlic basket. 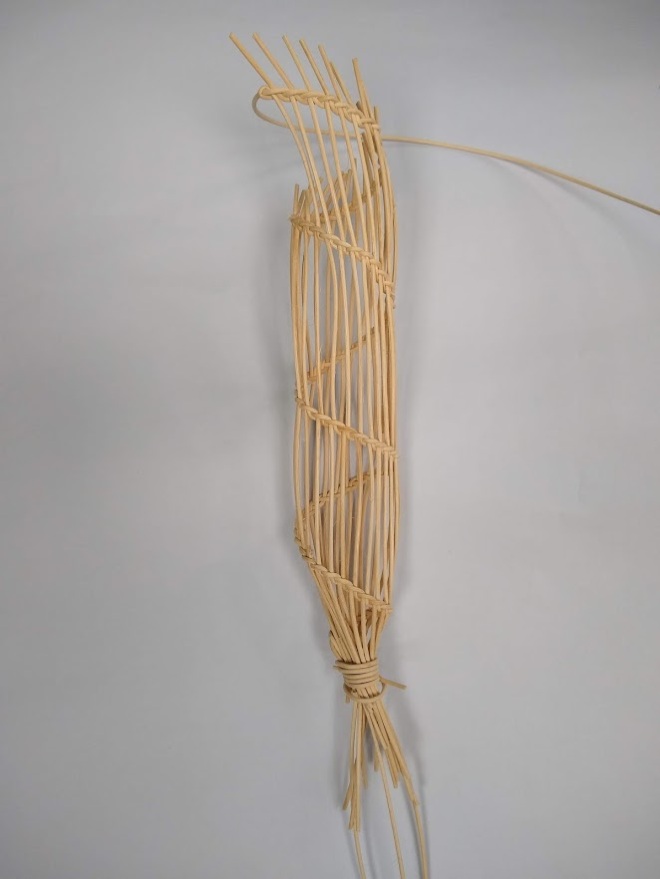 Here are some samples made by the group in varied materials, including cane, sisal and telephone wire.

We then moved on to using willow. Because willow rods taper, they naturally form a cone shape. We practised making flat tops and spiral tops.

We also tried making flat-bottomed vessels. Quite a lot of strength is needed here to pull the willow into place!

Finally, we worked with rush – first time with this material for us all. It’s strangely spongy but is much easier to manipulate than willow.

I started by making a small rush pouch.

Then in the final week most of us made rush bags.

Learning a new technique or working with new materials is always stimulating, and I could feel my creative mojo starting to stir at last!

Here’s a flat spiral I made using paper yarn. 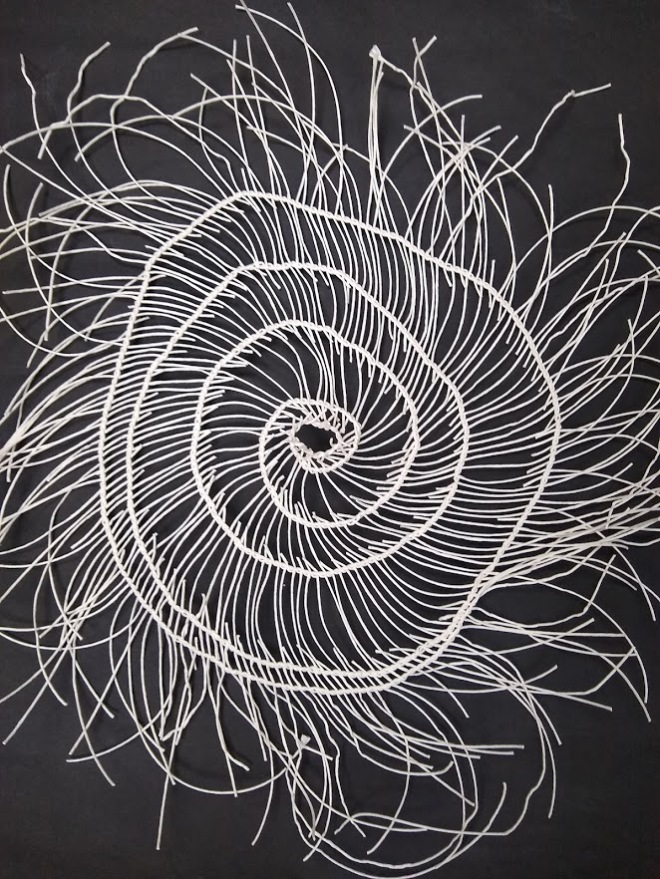 And I started making a pouch from telephone wire.

But then it wanted to turn into another spiral – so I let it!

Then I had another block – what to do with the ends? The consensus on Instagram was to leave them loose and wild, but they were rather long, and the piece just didn’t feel finished to me. Then someone suggested bending the spiral outwards to create a double-walled vessel. This was slightly tricky, as it meant I would have to plait in reverse. I couldn’t work out how to do that, so I had to plait from the inside looking through the other side of the basket. 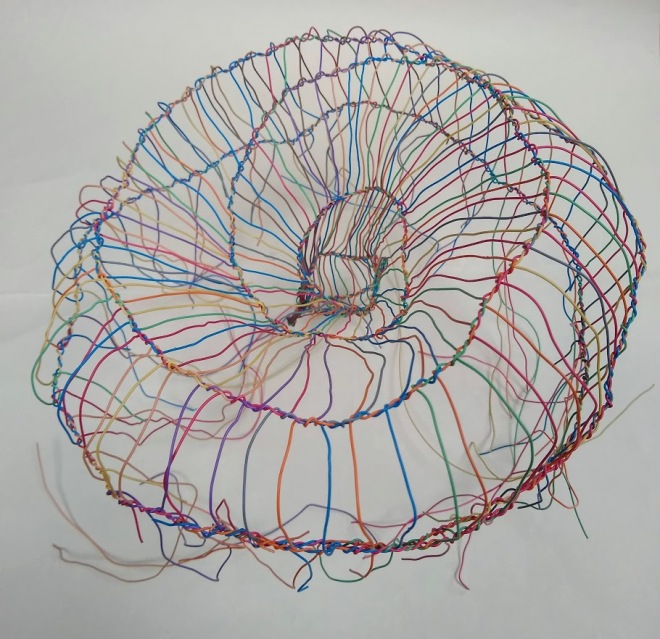 But I was pleased how the piece finally resolved itself in a sort of jellyfish form. And I left the ends free, so managed to have my cake and eat it! 😉