I remember now why I stopped making felt scarves at home.

Trying to nuno felt a 2-metre piece of fabric on a dining table that is only 1.66 metres long is a considerable challenge. It’s easier at the later stages, when the wool has started sticking to the fabric and shrinking, but at the delicate prefelting stage it involves careful folding and manipulation of layers of bubble wrap, fabric and fleece, especially when turning it over.

But like childbirth (so I’m told – as I don’t have any children), the memory of the pain soon fades. So when I decided I needed a banner for my felting demonstrations at Makerhood’s Making Uncovered event next week, it seemed a no-brainer to make a piece of nuno felt, using my manly scarf method.

And then it all came flooding back – the swearing, the pools of water on the floor, and the general tearing out of hair.

The banner is made – but remind me to buy a trestle table before I attempt anything similar again!

April looks like being a busy month for me, with two big events. 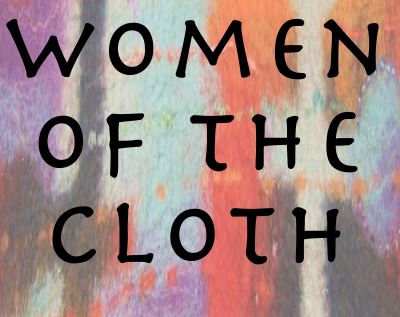 First, I’ve been invited by a group of textile artists, Women of the Cloth, to join them in an exhibition they’re putting on at the Jeannie Avent Gallery in East Dulwich, from 18 April to 1 May. The group consists of feltmaker and embroiderer Carol Grantham, weaver Joan Eytle Kendall and machine embroiderer Chrissie Messenger.

I met Carol when I was setting up Makerhood Norwood and we connected instantly (fellow feltmakers have so much to talk about 😉 ), so I was delighted when she asked if I would like to take part in the exhibition as a guest artist. She’s also invited another Makerhoodie Larna Smith, who makes lovely sculptural textiles.

As Carol will be exhibiting mostly felt, I will focus on indigo and shibori. I’ll post more details closer to the time. Somewhat surprisingly, the gallery doesn’t have a website, but the address is 14 North Cross Rd, Dulwich, London SE22 9EU. 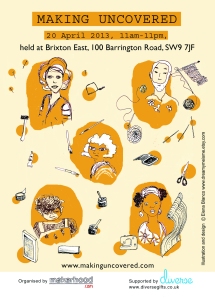 Second, volunteers at Makerhood Brixton have organised a day of demonstrations and workshops by 17 different makers, followed by a party in the evening. The event is called Making Uncovered and is being held in the beautiful Brixton East gallery.

I’ll be demonstrating wet felting, making purses, pots and bird pods – other makers will be covering everything from willow weaving and woodworking to screenprinting and aboriginal art.

Entry to the event is free, and so are the demonstrations; there are also some workshops that must be booked and paid for in advance. So if you’re in the area, do drop in – it should be a great day of celebrating creativity!

Exciting news for the weekend – some of my silk scarves are now being sold on the Bright Colours website!

Debbie Allen, who runs the online retailer, contacted me a few weeks ago via Makerhood and said she was interested in seeing some samples. Then she came round and bought a few.

I think they go very well with her brightly coloured bags, even if I say so myself.  😉

As I don’t have a mannequin at home, I took some of my new scarves into college on Tuesday with the aim of taking some shots to upload to my Makerhood stall. 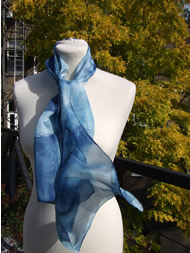 This proved to be quite challenging, especially with the silk shibori scarves, on a very windy fire escape! Some pins helped, but the mannequin itself blew over several times.

So there was a lot of hasty clicking at the moments the wind died down enough to let me get a reasonable shot!

However, I managed to get some pics in the end. 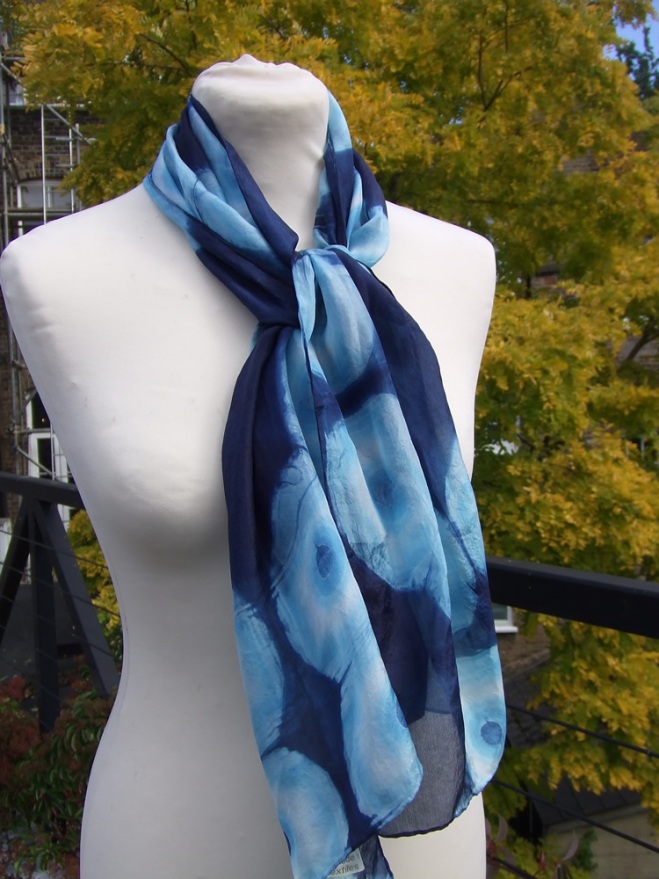 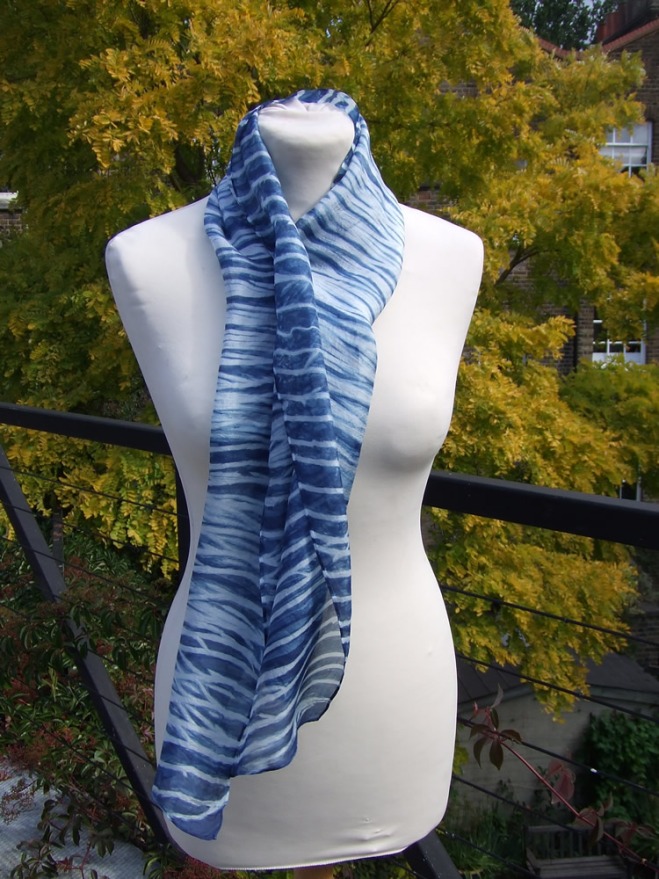 The knitted woollen scarves were heavier, so they were a little easier to snap. 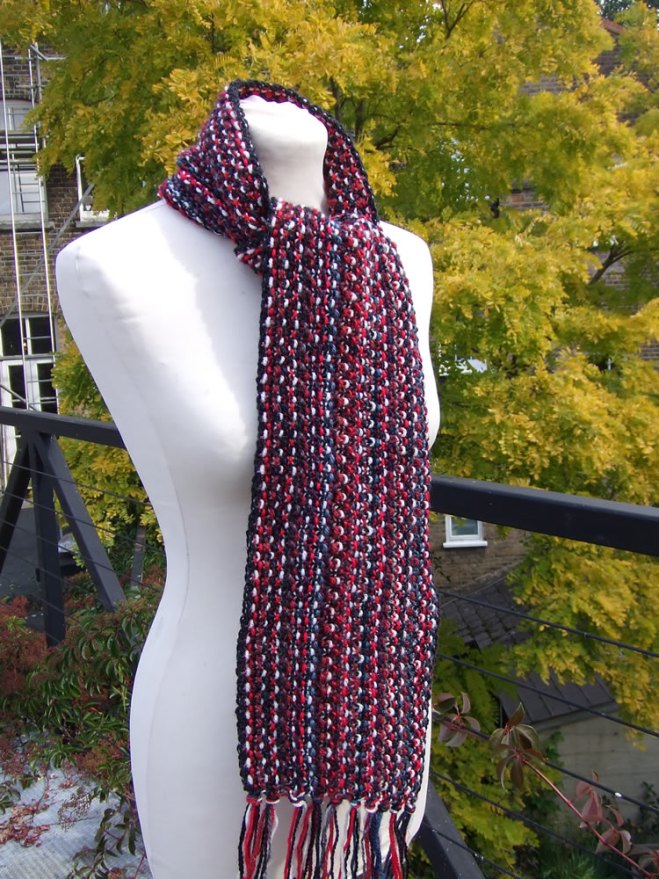 After all that, I also had time to start making some of the shibori cotton pieces into pencil rolls. 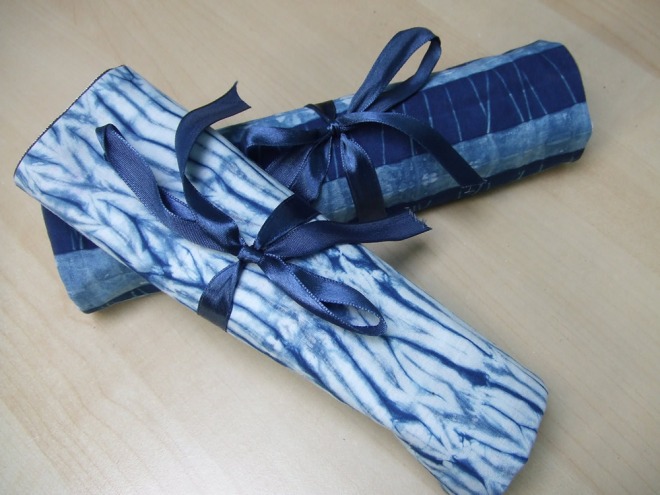 The production line is in full progress!

It’s been a strange weekend, as I’ve been followed round by an Italian film crew, recording my every move and conversation.

It started a few weeks ago, when the co-founders of Makerhood, Karen and Kristina, and I were asked to do an interview for a documentary about changing work patterns. Giulio Robino, an Italian journalist and photographer, won an award for his last documentary Toxic Europe, on the link between organised crime and the dumping of toxic waste.

Now he is working on a project about how, in an era of high unemployment, people are looking at other ways of working – going part-time or freelance, and doing voluntary work or trying to supplement their income by setting up their own small-scale businesses. Apparently, as a “freelance worker in the hard industry of culture” (as Giulio puts it) and doing voluntary work with Makerhood as well as trying to sell pieces I make, I am an ideal candidate to feature in this documentary!

So on Friday morning two guys turned up with all their gear to film me making a felt pot. Davide, on sound, seemed a bit disappointed that felt-making was not a particularly noisy process, the loudest sounds being the occasional squeak from non-soapy bubble wrap! His eyes lit up, however, when I picked up the electric sander. “Fantastico!” he exclaimed, as he adjusted the volume control.

It’s funny how a process that I’m so familiar with suddenly turns into a mass of fingers and thumbs in all the wrong places! I also explained that the rubbing and the rolling is quite a long and laborious process – but at least the repetitive nature will give them lots of footage to choose from when editing.

Saturday was a much longer day. I’d organised some Makerhood pop-up stalls in Brixton Village, so the crew arrived at 8am to film me packing up my suitcase and leaving the house, walking down the hill and through the middle of Brixton. I definitely felt rather embarrassed, as people kept staring and wondering who I was!

They continued filming throughout the day as we set up the stalls and took them down, talked to customers and even sold a few items. 🙂  They also did some filming at Cornercopia, a great shop and restaurant in Brixton Village that focuses on locally produced food and drink.

Thanks to the unhelpful and somewhat short-sighted attitude of the market management, most of the filming had to be done from inside the shops looking out. When ESP and I had lunch at Cornercopia after I finished my morning shift on the stalls, he found it very disconcerting to be eating while a camera was trained on him from inside the shop! And of course I was  miked up, so I had to be careful about what I said throughout the day and remember to turn the microphone off when I went to the loo! 😮

All in all, it was quite exhausting, and I’m happy to sink back into anonymous obscurity. I haven’t seen any of the footage, so I’m hoping I don’t look too fat or incompetent in the final edited version!

At Morley Winter Fair on Sunday a little girl kept coming over to my stall and constantly touching the items I was selling. My first instinct was to check that her hands were clean(!) – but I did understand her need for tactile stimulation.

When I was a child I was always being told not to touch things. And that continues, to a certain extent, with things locked away in glass cases or notices in museums telling you not to touch. Of course, I understand the damage that can be caused by thousands of grubby/oily fingers handling valuable, delicate objects. But it is such a shame not to be able to stroke the nubbly surface of a tapestry or run your hand over the smooth marble muscles of a Roman statue (or is that just me?!).

As a textile artist, I’m entranced by texture. For me, it’s one of the most important aspects of my work. It’s why I’m fascinated by how felt can be warm and soft yet so durable, and why I love the structural ridges and pleats of a piece of bound shibori.

So when I was asked to choose some of my favourite goods on the Makerhood site this week, I picked pieces that evoked a tactile experience. Even though I’m only looking at photos, I can still imagine how they would feel in real life. I hope you like them! 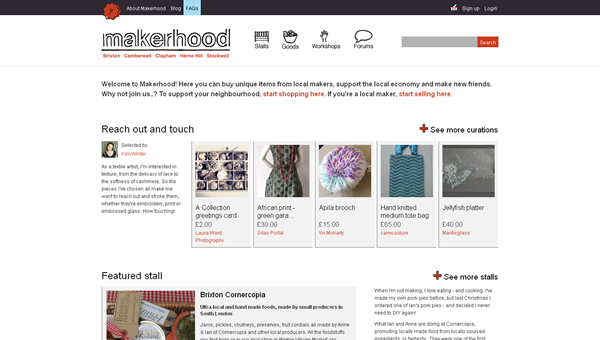 Lots of Makerhood activity this week.

On Thursday night we had another social at the Dogstar in Brixton, where I attempted to show people how to weave baskets from newspapers. This might have been a bit ambitious, given how long it takes to make the paper strips and how low the light was! Elena of Dreamy me Brixton  also got people sketching and making little books, while others knitted and chatted. A very good night.

I missed the first Make It Grow It Sell It event at Brixton last month because I was helping the Friends of Windmill Gardens at Feast on the Bridge. But the second one yesterday was great fun. I was on the Makerhood stall with Karen and Kristina, next to Carly of Picakes, one of the makers I interviewed for the Makerhood blog.

The atmosphere was very friendly, with bunting and live music, and I met some fellow felters as well as some more Makerhood makers, including Laura Ward, a photographer from Herne Hill. She’s posted some lovely photos of the day on her own blog – look out for an interview with her on the Makerhood blog soon.

I sold a lot more than at other sales I’ve done – which isn’t saying much! – so maybe the Christmas rush has started. In between, we even managed to make a sign out of foam, cardboard and brown paper, encouraging shoppers to buy local. The market organisers were so impressed they’ve asked us to make one for the market next month!

I haven’t written much about what I’ve been making recently for a very good reason – I haven’t had time to make anything! My day job has a large deadline looming, and I’ve also been doing a lot of work on the new Brixton Windmill website, which has just launched.

But I just have to mention that I managed to sell four items last week through Makerhood, the online marketplace we set up in south London to bring local makers and buyers together. I still haven’t managed to take any decent product shots for my stall, which is why I’ve refrained from posting a link on this blog.

But last week I sold a nuno scarf directly online, and a shibori pencil roll and two eyeglass cases at the new Make It Grow It Sell It market in Brixton, which Makerhood was involved in organising. I wasn’t actually at the market, as I was doing another stall at Feast on the Bridge for the Friends of Windmill Gardens, so many thanks to Kristina and Karen for being such good saleswomen!

The pencil roll was made from the piece inspired by the accordion, while the scarf was merino wool on net. 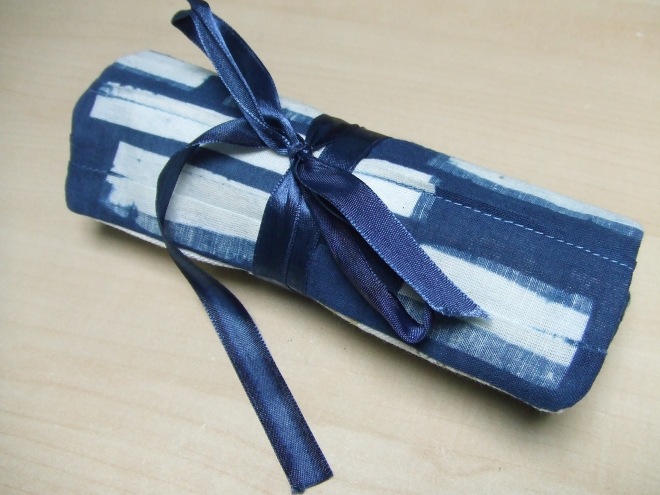 If you’re around Brixton this Sunday, I’m also having a stall at the Brixton Windmill Festival, so stop by, say hello, and take a free tour of the windmill!